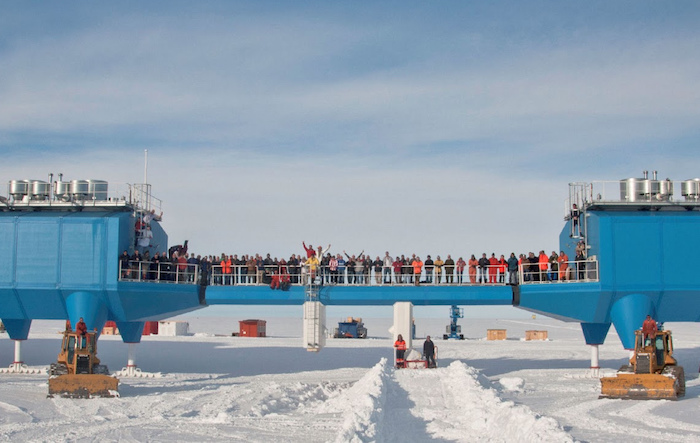 It might be possible to take billions of tons of CO2 out of the atmosphere by freezing Antarctic air.

Until the last few years, no one has ever proposed storing CO2 under ice. “There really hasn’t been any suggestion of using the cryosphere (the frozen parts of the planet) to store CO2,” said University of Alaska Fairbanks geologist-volcanologist Jim Beget, one of a group of climate scientists exploring ways that it could work.

The newest book from the Australian climate scientist Tim Flannery; Atmosphere of Hope, also brings up this concept.

Moving on from detailing the problems of climate change, as he did in The Weather Makers, Flannery lists some very inventive solutions. Here’s one.

We could use snow to cost-effectively sequester CO2.

Flannery explains that CO2 already is sequestered naturally when Antarctica gets very cold, because at -75 to -90 degrees Celsius, CO2 turns from a gas to a solid. So CO2 is already falling as snow out of the humid air that forms snow at times in Antarctica when it gets that cold. But this doesn’t get buried or stored anywhere. As temperatures warm back up, the solid CO2 just goes back into the air.

But adding refrigeration to further freeze Antarctic air down to -75 C would turn normal water snow into snow with the CO2 in it sequestered into solid tiny particles.

To use this property of snow to sequester CO2 would take adding refrigeration on a huge scale on Antarctica.

According to a trio of climate scientists who published a scientific paper on the idea at the Journal of Applied Meteorology and Climatology, this idea was inspired by the revelation of a CO2 ice cap at the South Pole of Mars by NASA’s Mars Global Surveyor and Odyssey missions. Carbon dioxide ‘snowflakes’ are pulling CO2 out of the atmosphere.

Temperatures on Mars are much colder than on Antarctica, which is why the CO2 ice forms.

Humid air turns to snow at 32 degrees F. The CO2 in the air would change from a gas into a solid at -220 degrees F. So there would be tiny pellets of solid CO2 in this super cold snow.

Such a gigantic undertaking would take about 19 GW of wind power.

They suggest building walled enclosures, each about 4 square miles, with refrigerated air within them. Each one could make about a 20″ layer of solid CO2 every day, 365 days a year. This pure CO2 snow would then be scooped out and dumped into its own 1.2 square mile “CO2 snow landfill” sequestering a billion tons a year of CO2. Regular snow would fall on the landfall as well, naturally sequestering it over time.

Temperatures at Antarctica already get down to -100 F. So adding refrigeration there would make it possible to extract the CO2 using less energy than anywhere else. The refrigeration would be powered by wind farms so no new carbon is burned. But it would still take about 19 GW of wind power to freeze the needed amount of humid air to do such a large sequestration job.

Another technology would be simple, letting nature do the work.

Beget proposed a similar idea in 2014, except this version would do away with the mechanical side but simply add a chemical to the air over Antarctica to let it fall as CO2 snow, and letting new snow fall on top, burying the CO2 naturally over time.

Here’s how Beget’s idea would work. His version dispenses with the wind power, the refrigeration, and the “snow boxes.”

Beget suggests seeding all the the air above East Antarctica using a compound deployed in smokestacks for carbon-capture; monoethanolamine, which concentrates out the CO2 into separate molecules. Successive snowfalls would naturally bury the layers of CO2-enriched monoethanolamine snow.

Unlike the refrigeration versions, which would take only about 550 square miles of Antarctica’s 5.5 million square miles with CO2 landfills, his idea would utilize the entire space of East Antarctica’s ice sheet, which is about the size of the United States, and can not melt, never getting much above -129 degrees Fahrenheit.

Why Antarctica’s snow makes a safe storage place for CO2

Antarctica has never melted going back well over 200,000 years, according the Vostok ice core evidence. Since there was a 2 degree warmer period than now about 150,000 years ago, they believe that this CO2 repository would likely not melt even as the planet warms.

“According to the physics and ice-flow models, you have a couple hundred thousand years.” said Beget.

At a billion tons of CO2 sequestered a year, this would be about the equivalent of Germany’s yearly CO2 emissions. It would make a dent, along with other CO2 reductions like moving to a clean energy economy. But that’s better than the other thing.