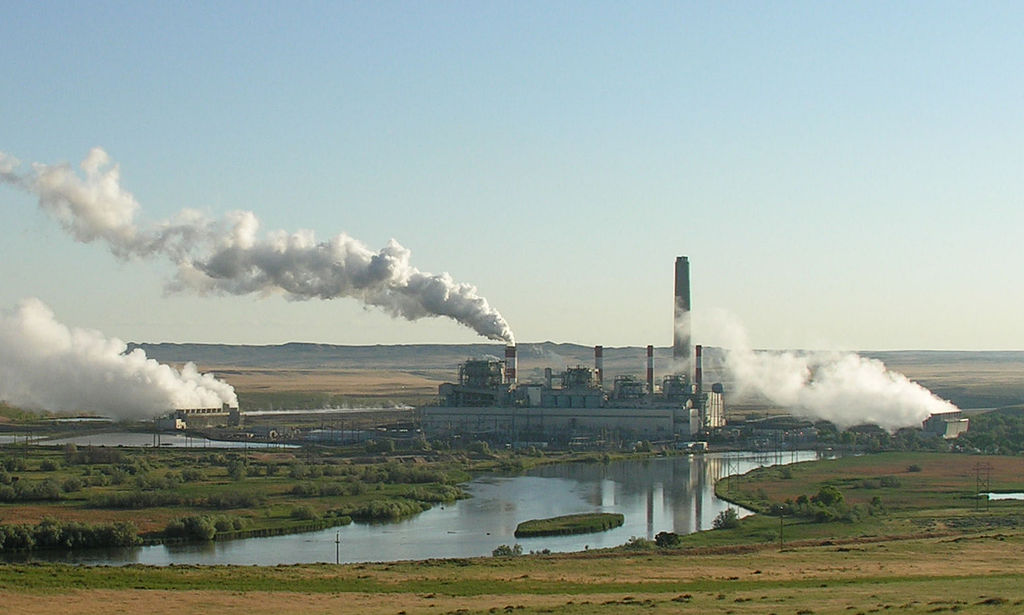 Yesterday, utility giant PacifiCorp published the latest draft of its Integrated Resource Plan (or IRP) that lays out how it will meet energy demands over the next two decades – and it’s going all-in on renewables and storage.

Owned by Warren Buffet’s Berkshire-Hathaway, PacifiCorp is a giant electric utility. Doing business as Pacific Power and Rocky Mountain Power, it serves major swaths of Utah and Oregon as well as smaller sections of Wyoming, Washington, Idaho, and California. In total, PacificCorp serves over 1.8 million customers across its six territories.

PacifiCorp adding 7,000 MW of renewables and batteries by 2025

In the draft IRP, which it will officially file on October 18, PacifiCorp lays out its preferred electricity generation plans over the next twenty years. Generally speaking, the plan revolves around increasing low-cost wind, solar, and energy storage to replace aging, and increasingly expensive coal-fired power plants in several states.

For the first time ever, PacifiCorp has identified energy storage as a key ingredient for a cost-effective generation portfolio. Until 2025, all energy storage will be paired with new solar resources, including:

PacifiCorp will source all this renewable electricity from its own newly-built generation sources as well as purchase the electricity and renewable energy credits (RECs) from partners.

Just like any utility, PacifiCorp uses modeling tools to figure out the long-term cost-effectiveness of a handful of scenarios, each with different mix of generation sources. One scenario, for example, could include more solar, while another includes more coal or wind. The ultimate goal is to find the most cost-efficient option. With the ever-falling cost of renewables, they have actually surpassed conventional fuels, to the point where even conservative companies are embracing them.

“This plan reflects the ongoing cost pressure on coal as wind generation, solar generation and storage have emerged as low-cost resource options for our customers.”

PacifiCorp to close 20 coal plants by 2038, and some ahead of schedule

According to the IRP, PacifiCorp currently has 24 coal-fired plants pumping out electricity. Under the new draft, it wants to retire 16 of these plants by 2030 and 20 by 2038. Under these plans, coal-fired generation would drop by 2,800 MW by 2030 and 4,500 MW by 2038. (You’ll notice that’s far less than the new renewable sources it’s adding, thanks to its territories’ growing population and energy needs.)

In this latest draft, PacifiCorp even bumped up the retirement dates by 4 to 14 years for five of its coal plants in Wyoming, Montana, and Colorado. In previous drafts of its IRP earlier this year, PacifiCorp estimated it could save its Wyoming customers $248 million over the next 20 years by closing four local coal plants years ahead of its original schedule, so the potential financial savings are pretty substantial.

“With a focus on lower-cost renewable resources and strategic transmission investments, this plan allows us to continue to deliver the reliable and low-cost energy our customers need as we embark on a phased and well-managed coal transition that minimizes impacts to our thermal operations workforce and communities.”

With the replacement of coal with renewables, PacifCorp estimates it can drop its annual CO2 emissions from 40 million tons in 2019 to 18 million by 2038 – about 60% of its emission level from the baseline 2005 levels.

That drop is a huge step up over its estimates in the previous 2017 IRP, which left CO2 emissions at over 30 million tons/year in the late 2030s – about ⅓ higher than the current estimate.

It plans to further reduce emissions to about 6 million tons/year by 2049, which is about a 95% reduction over its 2005 emissions levels.

Utilities across US replacing coal with renewables 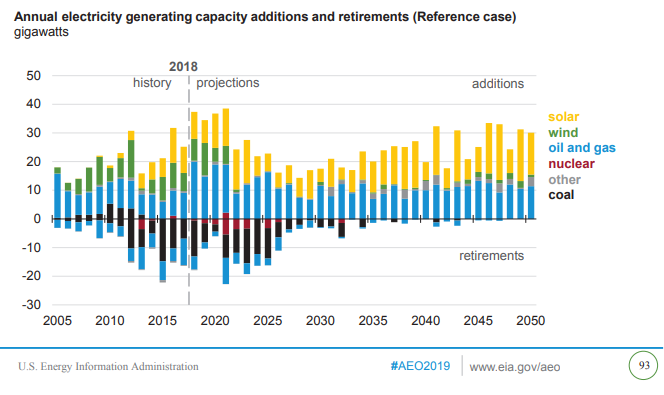 PacifiCorp isn’t alone in moving towards renewables. With the quickly falling cost of solar, wind, and battery storage – as well as the increasing costs to continue operating aging coal plants – Both PacifiCorp and many other utilities across the US are finding renewables more and more beneficial, not just from an environmental perspective, but from a cost perspective as well.

The US Energy Information Administration forecasts that renewables – especially solar – will make up more and more of our electricity generation over the next thirty years, driven by these falling technology and installation costs.

The graph above shows the EIA’s forecast for yearly additions to electricity generation up to 2050. Note the huge increases in solar and natural gas (yellow and blue bars, respectively), as well as the large trend of retiring coal, natural gas, and nuclear over the next 5 to 10 years.

Like with PacifiCorp, this transition away from coal is already happening across the US. Back in December 2018, Xcel Energy announced plans to go 100% clean energy by 2050. Operating in 8 states and boasting 3.3 million electric customers, Xcel is so far the largest utility to go 100% clean in the country. It says it will focus on solar, wind, and energy storage to meet this goal, but ‘clean energy’ can also include nuclear, and even natural gas and coal if carbon-capture devices are added.

In the south, Florida utility FPL – the 3rd largest utility in the US – announced in early 2019 that it would add the world’s largest battery system to an existing solar farm. The 409 MW facility is 4x larger than the current record holder (Tesla’s project in South Australia) and designed to replace two aging natural gas plants. A few months previously, FPL also announced plans to install 30 million solar panels by 2030.

Also earlier this year, Oregon utility PGE announced a new 380 MW solar, wind, and energy storage project – the first project in the US to co-locate all three of these resources.

As solar, wind, and batteries continue to drop in cost, we can expect market forces to push more and more utilities to join PacifiCorp in adopting ever-greater amounts of renewable resources.