PacifiCorp, the Berkshire Hathaway-owned utility that operates in three states, is possibly considering replacing its Wyoming coal plants with solar, wind, and energy storage. But the state legislature in the coal-heavy state, fearing for local jobs, has taken steps to prevent just that.

Meanwhile, New Mexico is providing a great example of how to move towards renewables while at the same time supporting local residents who are most vulnerable to the clean energy revolution: the plant and mine workers.

PacifiCorp could save customers $248 million by retiring coal plants early

For the first time, PacifiCorp is considering closing four of its most costly coal-fired power plants in Wyoming, potentially replacing them with solar and wind energy, paired with energy storage.

The utility reported last week that it could save customers $248 million over the next 20 years by retiring the four Wyoming coal plants by 2022, years ahead of schedule. In the analysis, PacifiCorp found that the cost of its coal resources is $14 per MWh higher than its potential replacement, mostly solar, battery, and natural gas.

The analysis is part of the utility’s planning for its next Integrated Resource Plan, its roadmap for its future energy generation, which it will file with the state regulators in August. The utility ran numbers for a variety of situations: retiring two, three, four or more coal-fired plants. It found that, even closing nine plants in Wyoming and Colorado, their customers would still come out ahead financially, to the tune of $12 million dollars.

This of course isn’t the first time PacifiCorp has looked into retiring aging coal plants. Originally the utility planned to convert Unit 3 at its Naughton Plant in Wyoming to natural gas, but the sheer cost of the endeavor led the utility to instead close the plant in February 2019. It also plans to turn off Arizona’s coal-fired Cholla 4 at the end of 2020.

However, this analysis is the first glimpse that PacifiCorp is considering using renewables to replace coal, a move that the Wyoming legislature recently made much more difficult.

Wyoming is coal country. In 2017, the state produced 316 short tons of coal, more than any other state in the nation. In fact, the state produces 41% of all the US’ coal, beating out the six other top coal producers – West Virginia, Pennsylvania, Illinois, Kentucky, Texas, and Montana – combined.

So to say that coal is an important chunk of the state’s economy would be accurate. On top of that, coal, gas, and oil mining account for 30% of the state’s economy. And since Wyoming residents enjoy no personal income tax and there’s no corporate income tax, much of the tax burden falls on mining, which is taxed as a property tax and makes up 94% of all property taxes income.

With all this in mind, it shouldn’t come as a surprise when the Wyoming Congress passed SF159, a bill designed to protect the local coal industry by making the closure of coal-fired power plants more difficult. Signed by Governor Mark Gordon on March 8 of this year, the law stipulates that, before closing a coal-fired power plant, the utility must make a ‘good faith effort’ to find a buyer that would continue operation. Once sold, the law states the owner should operate the plant until the end of its natural useful life and that the local utility must purchase the electricity produced.

It’s all a Hail Mary attempt to keep the state’s plants and mines from closing, leaving local workers out of a job. And it’s not just a thought experiment either. As we mentioned, PacifiCorp already closed one of its Wyoming coal plants earlier this year. And one of the plants that PacifCorp is potentially considering closing, the Naughton Plant in Kenmmerer, Wyoming, employees about 600 of the small community’s 3,500 people. Closing the plant down would certainly deal a heavy blow to the small town.

But energy analysts have raised a multitude of issues with new law. Some have argued it’s simply government meddling in free market enterprises, though that point is somewhat moot as the utility industry is already heavily regulated.

Coal’s been on its way out since the late 1990s

Despite Wyoming’s attempt to keep coal alive and well in the state, they’re fighting a changing current. Natural gas, wind, and solar are now cheaper than coal-fired electricity generation, according to analysis firm Lazard.

Researchers looked at the lifecycle costs of both conventional and renewable energy sources and found that wind energy is the most cost-effective option, with a low price of $29/MWh, followed by utility-scale solar at $36/MWh, then natural gas at $41/MWh. Coal comes in at $60/MWh – over 2x the cost of wind energy.

This higher cost, along with the growing sentiment that coal use should be limited, as it contributes to global warming, has led to more and more utilities converting coal plants to natural gas or retiring them early, often to be replaced by renewables (like PacifiCorp is currently mulling over).

As you can see in the EIA graph below, coal use hit its peak in 1998. Over the next decade, coal-fired electricity generation stayed almost constant, though falling slightly, until 2008 when it nose-dived. Since 1998, coal generation has dropped almost 40%, largely replaced by natural gas, which is cheaper and burns cleaner. You’ll see that wind and solar make up just a tiny fraction of our total electricity generation, but they’re growing quickly. 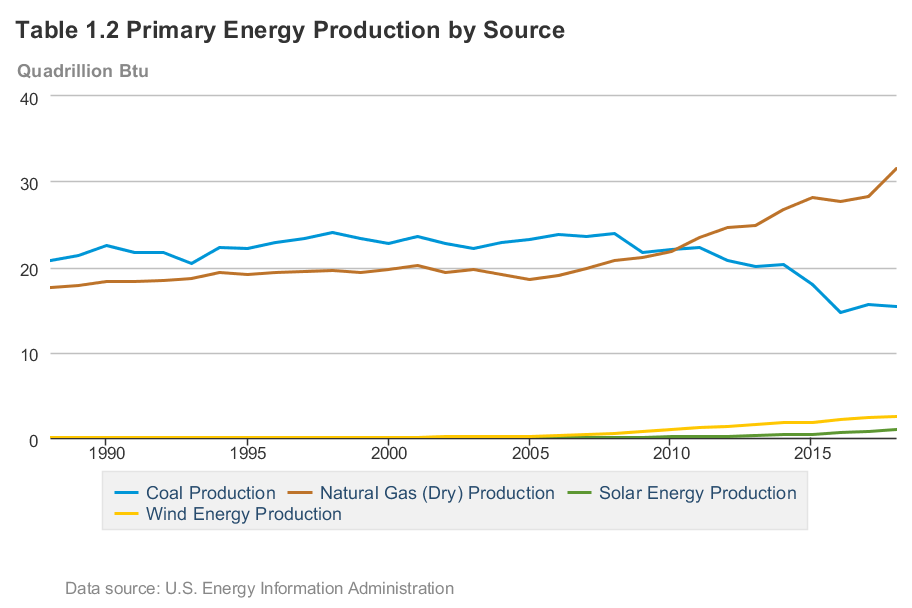 Regardless of political leanings or environmental views, it seems that the free market is simply pushing coal out. There are now options, like natural gas and wind energy, that either produce less emissions or don’t produce emissions at all – all at a lower cost than coal.

Wyoming congresspeople want to help Wyoming residents – obviously a worthwhile endeavor – but they’re going against the tide. Instead of hanging on to a dying industry, their time might be better spent helping develop new industries and creating training programs for new job skills, like New Mexico recently did when it passed its clean energy bill, to great applause.

New Mexico: An example for other states

On March 22, after Governor Michelle Grisham signed into law the Energy Transition Act, New Mexico became the fifth US state/territory to set a goal of 100% clean energy (along with Hawaii, California, Washington DC, and Puerto Rico). The goal sets transitional goals of 80% renewable by 2040 before going 100% carbon free in 2045.

This is a huge step forward, but it was a less tweetable feature of the bill that really garnered praise. Along with the 100% carbon free goal, the bill outlines funding mechanisms for training and severance programs for plant workers that lose their jobs.

As laid out by the Union of Concerned Scientists, the bill states that each closing plant should receive up to $20 million for severance and worker training for plant and mine workers, as well as an additional $15 million into an Energy Transition Displaced Worker Assistance Fund to be administered through the state. On top of that, to further encourage skilled job trainings, the bill also requires electricity projects to offer apprenticeships by 2020.

Lastly, SB489 sets aside an initial $30 million for coal-fired plant decommissioning and mine reclamation costs, providing jobs and setting the local community up to move forward.

These programs will be funded by a portion of the financial savings from low-cost bonds utilized by PNM – the state’s largest utility – to recover the financial losses from closing the plants earlier than expected.

New Mexico’s 100% goal is a recipe for success, looking to the future and seeing where they want to be, but also helping the people move together with the transition, not get left behind. The Union of Concerned Scientists praises the bill for its focus on people:

“Critically, essentially, it begins not by leaping to where the state is going, but instead by reckoning with where it’s been. It is considerate of those the transition away from coal risks leaving behind, and works to ensure that they’re readied to be a part of what’s to come.”