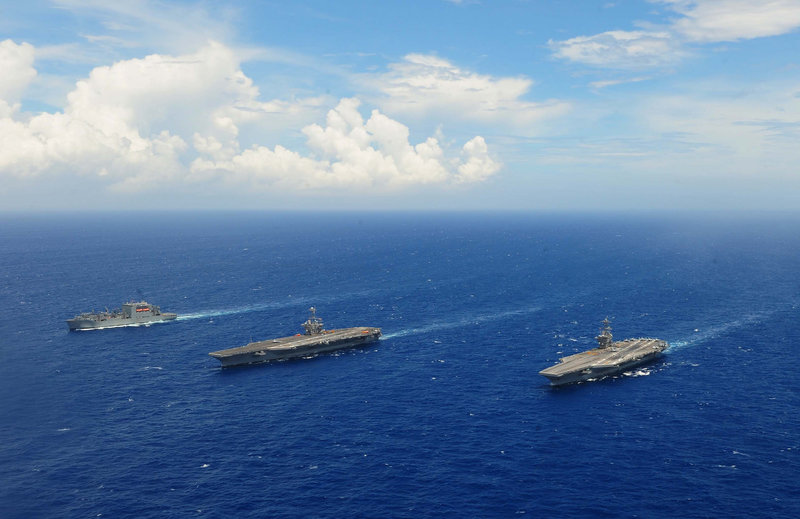 The US Navy is ushering in an era of unprecedented military energy innovation with the deployment of its Great Green Fleet.

On January 20th, the missile destroyer USS Stockdale officially became the first US Navy ship to use a biofuel mixture for regular military operations.

Ray Mabus, Secretary of the Navy, set energy goals in 2009 for the Department of the Navy, including an increased use of alternative and renewable energies both in marine operations and ashore in the Navy’s facilities. One of the big goals of the energy initiative was to have the Navy’s fleet reduce its overall petroleum use by 50% compared to 2009 amounts.

When USS Stockdale left San Diego to join its strike group in the Pacific, it marked the beginning of the Navy’s push for cleaner power.

The Great Green Fleet is the nickname for the pilot project in the energy initiative: a Carrier Strike Group that will serve as a test for the tactical viability and cost-effectiveness of biofuels. The name was chosen as a tribute to President Theodore Roosevelt’s Great White Fleet, the new and improved Navy ships that demonstrated the United States’ military might in the world’s oceans at the beginning of the 20th century. The Great Green Fleet is intended to show America’s ability to adapt and innovate its military without losing any of its strength, and be a model for the world.

The Carrier Strike Group of the Great Green Fleet consists of an aircraft carrier, the USS John C. Stennis, and its escort ships. The carrier is powered by a nuclear reactor, and smaller escort ships use an advanced biofuel mixture blended from 10% beef fat and 90% conventional diesel fuel. The beef fat is obtained from farmers in the American Midwest, and is processed into fuel by AltAir Fuels in California.

Additional energy conservation measures have also been implemented across the entire Carrier Strike Group: A shipboard “energy dashboard” provides real-time analysis of energy demand, and allows the crew to adjust energy use, while a new Thermal Management Control System allows for better climate control through programmable thermostats. Shipboard overhead and instrument lighting has been replaced by energy-efficient LEDs. These measures are expected to be rolled out to all other ships in the fleet over the course of the year.

Commitment to biofuels, despite criticism

The project has received strong criticism from some politicians, who worry that the extra costs incurred by the purchase and refining of biofuels will strain the military budget. Initial biofuel formulations that were used in testing in 2012 cost the Navy up to $15 per gallon, several times more than regular fuel. The current 10/90 blend being used by the Great Green Fleet is closer to $2 per gallon, but current low oil prices have opponents questioning the point of switching over in the first place.

Secretary Mabus, though, insists that a shift to biofuels will improve the military’s operational flexibility. That flexibility also applies to the Navy’s shore-based installations, which are currently using 1.1 gigawatts of renewable energy: approximately half of their total energy demand. More renewable energy and a mixed energy profile means more flexibility and security in the case of a disruption to local electrical grids or the power plants that supply them. There’s security in renewable energy and biofuels, and the US military is taking that very seriously.