Advertiser Disclosure: We may earn revenue from some links on Earthtechling, but we only recommend products and services that we truly believe in. Learn More.

Solar tiki torches are a great way to brighten up your yard and help you feel like you’re miles away on a beach somewhere. Plus, you don’t have to worry about them running up your electric bill or accidentally starting anything on fire. There are many models to choose from and there’s no one best option for everyone.

We liked the TomCare Solar Lights the best because they were durable, reasonably priced and had that traditional tiki torch look.

But you might like one of our other picks better, depending on what you had in mind.

Keep reading for detailed reviews of our four top picks, as well as a closer look at how to choose the best solar tiki torch for your space, or read up on the best outdoor solar lights to get other ideas of how to brighten up your yard. 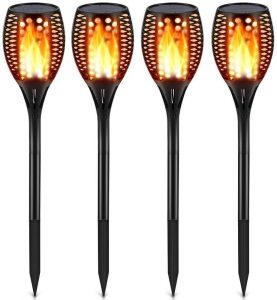 The TomCare Solar Lights were the obvious choice for our top pick because they were so highly rated by customers and they fit the look most people are going for when they’re seeking out a solar tiki torch. This set of four lights includes a discreet solar panel in the top of the tiki torch so that it doesn’t distract from the look of the lamps. When placed in full sun, these lights can last for about 10 hours in the summertime and five hours in the winter.

The TomCare solar tiki torches are 32.6 inches tall normally, but there’s an extra ground stake attachment that can bring them up to 43 inches — a pretty typical height for a solar tiki torch — if you want them a little taller. This is a nice touch, especially if you have a lot of low-growing vegetation that could block the light of a shorter solar tiki torch. Though the stake itself is plastic, customers report that it is solid and holds up well over time.

These solar tiki torches are IP-65 water-resistant, which should be more than enough to withstand dust and rain. According to the manufacturer, it can also withstand snow and frosting, so you can leave your TomCare Solar Lights up all winter. You may have to brush snow from the tops of the lights periodically as the snow could block the solar panels and prevent the tiki torches from charging. This would be an issue with any solar tiki torch, though. 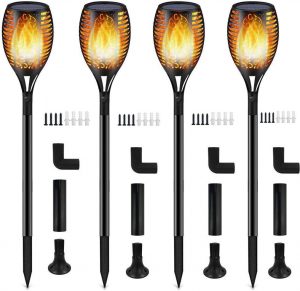 The TopLife Solar Lights are a great alternative to our top pick if you like the look of solar tiki torches but lack the yard space to stake them into the ground. They’re also a great option for those with tough, rocky yards that you cannot drive a stake into easily. They come with an L-shaped attachment and a wall-mounting bracket so that you can place the lights on the side of a building or a deck. The traditional stake attachments are included too in case you want to put them in the ground.

If you choose to hang your TopLife Solar Lights on the wall, it will require some assembly, but customers report that this is easy and quick. Just make sure you position the solar tiki torches somewhere where the top will get a lot of sunlight as this is where the solar panel is. You don’t need to worry about keeping it out of the elements because it is IP-65 water-resistant just like our top pick.

The lights themselves are surprisingly bright and contain 96 LED bulbs. This helps them look much more natural than many of their competitors, though the actual look will depend in part on how much sun the light is getting. According to the manufacturer, you can expect about 10 hours of power in the summer and five hours in the winter once the solar tiki torches are fully charged. 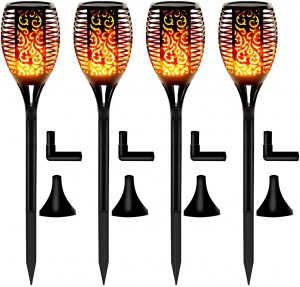 The Otdair Solar Torch Lights have an elegant swirling pattern on their face that can dress up any space. Like the TopLife Solar Lights, these lights include a wall-mount option if you don’t want to put them in the ground. You can also choose to stake them into the ground like a traditional solar tiki torch or place them on a hard surface, like a table or patio, using the included attachment.

These lights are shorter than many of their competitors at just 33.5 inches, so they may not be ideal for those with a lot of low-growing vegetation that might block the solar panel. But as long as that’s not an issue, you shouldn’t have to worry about any other problems. The Otdair Solar Torch Lights are IP-65 water-resistant and users have been quick to comment on their durability and longevity.

The lights are also reasonably priced, so they’re a smart choice if you’re on a budget. You could also check out our next pick if you’re trying to keep your costs down. Despite the low cost, the manufacturer promises the same level of performance as our other picks — about 10 hours in the summer and five hours in the winter when placed in full sun. 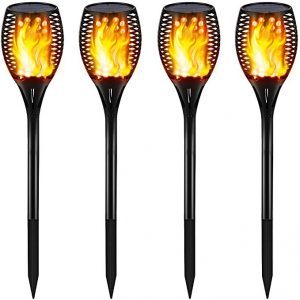 The Gold Armour Outdoor Solar Lights should appeal to you if you liked the look of our top pick but couldn’t justify spending that much on solar tiki torches. These lights are similar in appearance and quality, but they cost less. This savings will be especially noticeable if you purchase multiple packs of the solar tiki torches to cover a large area.

What really sets these lights apart from other budget competitors, like the Otdair Solar Torch Lights mentioned above, is that the Gold Armour lights include a 12-month warranty, so if anything happens to your lights during this time, the company will refund your purchase or replace your lights with new ones. This shouldn’t be a major concern, though, as most customers report having no issues with the Gold Armour Outdoor Solar Lights.

You can adjust the height of these lights from 30.7 to 43 inches, depending on your preference. Like the other lights listed here, these solar tiki torches are IP-65 water-resistant, so you don’t need to worry about shielding them from the elements. They also have a surprisingly long run time — up to 12 hours after fully charging for eight hours.

What You Need to Know About Solar Tiki Torches

Here are a few things that you should know before buying any solar tiki torches.

They won’t perform that well in shady areas.

Survey your yard and consider where you’d like to place the solar tiki torches. If it’s in the shadow of a building or a large tree, you may want to rethink your positioning or consider purchasing a different type of solar light instead.

Just because you can leave your solar tiki torches out in the winter doesn’t mean you should.

Many manufacturers claim that their solar tiki torches can be left up all year round, but leaving yours up in the winter could be problematic if you get a lot of snow in your area. First, the snow could obscure the solar panel or the light entirely and then you won’t be able to enjoy them. Second, even if the snow or the cold won’t damage them, it could make the posts or stakes brittle, especially if they’re plastic. If someone knocks into them, they could break more easily.

Consider bringing your solar tiki torches inside for the winter. If you decide to do this, get them out of the ground before it freezes or you might not be able to remove them. If you decide to leave them in the ground, periodically brush away the snow on and around the light so that you can see it and the solar panel can get the light it needs.

You’ll probably need more than one pack, so plan for that in your budget.

Solar tiki torches usually come in packs of four, but unless you only plan to cover a small walkway, you’ll probably need more than one package to cover your space. This can significantly affect how much you spend on the lights.

Before you purchase any solar tiki torches, decide how much you can afford to spend and then get an approximation of how many lights you’ll need. You might be able to buy a two-pack if you don’t need another four-pack, but it also doesn’t hurt to have some extra lights on hand in case one or two of them break.

How We Chose the Best Solar Tiki Torches

We evaluated dozens of tiki torch models based on their weatherproofing, durability, style and cost to end up with our top five options.

With any type of outdoor light, weatherproofing is important. Rain, snow, or temperature extremes can damage lights that are not designed for outdoor use. Fortunately, virtually all solar tiki torches have some degree of weatherproofing, but how much depends on the model.

You might see an “IP” rating when comparing solar tiki torches. This stands for “Ingress Protection” and it’s a measure of how well the light can keep out solids, like dust, and liquids, like water. It’s usually followed by two numbers, like IP-64, IP-65 or IP-67. The first number indicates dust resistance with a 6 indicating that it’s dust-tight. The second number indicates how well it keeps out liquids with a higher number indicating better water resistance. This is important if you live in an area that sees a lot of rain or if you’ll be running sprinklers nearby that might hit the solar tiki torch.

Apart from the solar tiki torch’s weatherproofing, you must also evaluate the quality of its construction. A small run-in with a lawn mower or someone accidentally stepping off the path could ruin a cheap solar tiki torch with a plastic stake.

The best tiki torches are made from durable plastic or metal that won’t scratch, bend or break easily. Depending on their style, they may have some sort of glass around the light as well and this should also be resistant to breaking and scratching.

Everyone will have their own preferences about how their tiki torches look. We tried to include several different styles in our choices to suit all kinds of tastes. We also looked at what options the manufacturers offer for customizing the lights. For example, some lights have extra posts so you can adjust the height or L-shaped mounting brackets so you can hang the light from the wall rather than placing it in the ground.

While rare, some solar tiki torches include special lighting effects so you can change how the lights look to match your style. Features like these aren’t as important as the construction of the lights, discussed above, but it can help make a difference if you’re torn between two similar styles.

When comparing the cost of solar tiki torches, it’s important to make sure you’re comparing equal quantities. Four-packs are most common, but you can also purchase two-packs if you only want a couple of lights. You can either double the cost of a two-pack or determine the cost per light to figure out which one offers the best value.

Some solar tiki torches include warranties. This is worth weighing in your decision because if you encounter a problem with your tiki torches and you don’t have a warranty, you’ll have to pay to buy new ones on your own, but with a warranty, the company will replace them free of charge. That could be worth paying a little extra for.

Solar tiki torches can add a tropical ambiance to your yard or walkway without dealing with flammable gas.

There are a lot of great models out there, but we recommend the TomCare Solar Lights as a good all-around pick.

But depending on what you’re going for, one of our other picks might suit you better. Take a look at all of them before you make your final decision.