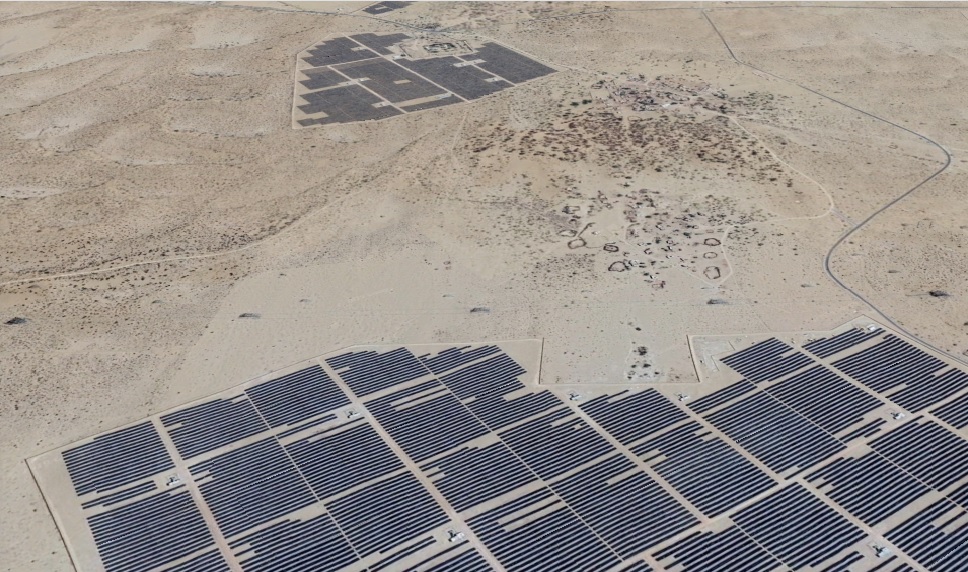 On the hot, sweeping deserts of Rhajastan, India has built the world’s largest solar farm – and they aren’t even done yet.

The 2.5 GW solar farm, known as the Bhadla Solar Park, is just one small part of India’s ambitious plan to install 100 GW of solar by 2022. The country enjoys the cheapest solar costs in the world, but such a large amount of solar in such a huge time is still a tall order.

How big is the Bhadla solar farm?

As of May 2019, developers have completed 2,180 MW of the park, which already makes it the biggest solar farm in the world. When the project is complete, which is planned for the end of the year, it will boast 2,255 MW of capacity.

To put that number into comparison, it’s almost 50% more than all the solar installations that Sunrun -the US’ largest residential solar installer – has completed. It’s also about 50% larger than the world’s previous record holder for largest solar installation, China’s 1,547-MW Tengger Desert Solar Park.

So, in a word, the Bhadla Solar Park is ginormous.

The park is actually broken up into four sections (Bhadla-I, -II, -III, and -IV), each huge in its own right and each with its own developers from as far away as South Africa, Finland, and Japan.

The project is a joint effort between the state-owned energy company NTPC, which provides electricity across the country, and the Solar Energy Corporation of India, a subsidiary of the country’s Ministry of New and Renewable Energy. The Bhadla Solar Park actually began in 2016 and was originally planned for completion by December 2018. However, as development continues that date has been pushed back a year. Officials now hope to complete the project by the end of 2019.

The Bhadla park is spread over 10,000 acres (15 square miles) in the Jodhpur district of Rajasthan – one of India’s tourist hotspots, known for historic forts and temples. The park though is far from any tourist area.

The area is dry and sandy, with temperatures hovering around a sweltering 115 degrees F. Sand storms and hot winds occur daily and few, if any, can stand to live in the area. The nearest town, the district seat Pahlodi, is 50 miles away – an hour and a half by car – and supports just under 50,000 inhabitants. This desert really is deserted.

With unyieldingly strong sun and virtually no one around, the area is a great place for solar. The above map shows irradiance levels – a measure of the sunlight intensity – throughout the world. As you can imagine, solar farms are frequently centered around the major deserts of the world, where strong sunlight is plentiful and dwellings are rare. We previously mentioned China’s Tengger Desert Solar Park, which now comes in 2nd place overall and is located in the Gobi Desert.

You’ll see on the map that western India’s irradiance level is comparable to the Southwest US, where most of our own large solar farms are located. The US’ largest solar farm, the 579-MW Solar Star project, is located north of Los Angeles – which sees about the same irradiance as the Bhadla area.

When the Solar Star project was completed in 2015, it was the world’s largest PV farm, but the solar industry moves quickly. Now, just four years later, it doesn’t even break the top 10, as India, China, and Saudi Arabia have moved to dominate ultra-large solar projects.

Beyond its massive scale, the Bhadla Solar Park also set the new standard for solar costs in India, with developers bidding out the lowest solar costs ever seen in India and which still hold today (as far as we know). Back in 2018, developer Acme bid 2.44 rupees ($0.34) per kWh for 200 MW of capacity.

In fact, India boasts the cheapest solar in the entire world. In the US, Mexico, and Australia, large-scale PV projects costs about $1.50/watt. Germany, France, and China boast much lower costs, at around $1/watt.

In India, on the other hand, installing solar costs just $0.79/watt – almost half the cost of the US. Low technology and labor costs, as well as low financing and permitting costs, help drop the cost of solar. Developers are also able to squeak by on lower margins as well.

India Is Going Big on Solar

India already has over 30 Bhadla-like solar parks in development throughout the country, in a bid to both expand the availability of electricity (20% of the country doesn’t have access to electricity) and also meet ever-growing demand as the Indian economy continues to grow.

In fact, the country has a goal that 40% of its electricity come from renewable sources by 2032. To that end, Prime Minister Narendra Modi announced in 2018 that India will install 175 GW of renewable energy capacity by 2022, the majority of which would be solar:

“In India, we have started the world’s largest renewable energy expansion programme. We will generate 175 GW of electricity from renewable sources of energy by 2022, of which, 100 GW will be from solar power. We have already achieved 20 GW installed solar power.”

That’s a major goal, especially considering the extremely short timeline. The US boasts about 70 GW of solar, so meeting India’s 100 GW goal would be a major triumph.

By 2018, India already had 24 GW installed, with another 14 GW in the pipeline and 23 GW in planning, leaving it 40 GW in the hole. Some industry experts expect the country to not hit this goal by the deadline, due mainly to unsupportive government policies like import taxes on solar cells and panels, but the government’s still moving forward and hoping to bid out all projects by 2020.