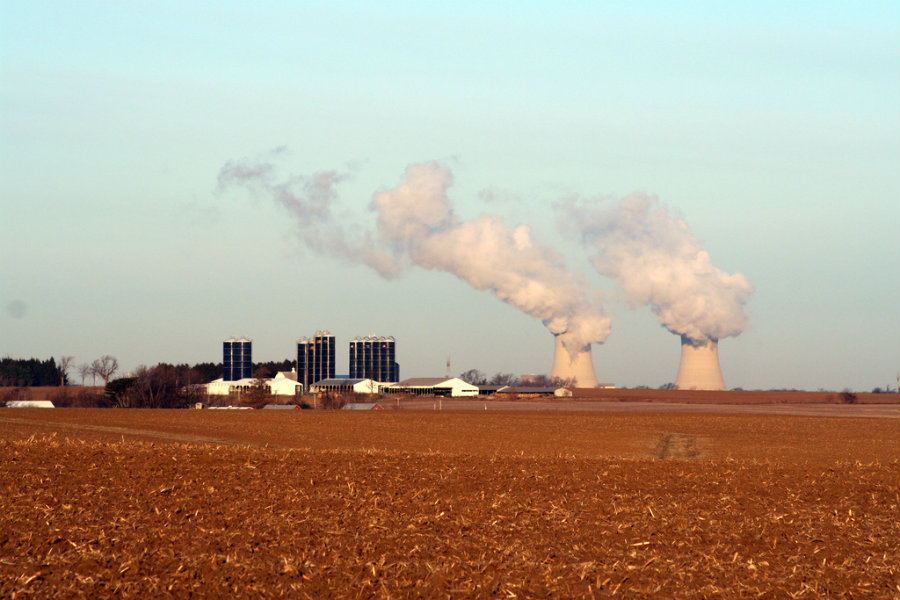 James Hansen and many other leading climate scientists see nuclear power as essential to a climate-safe future.

Substituting nuclear power for coal was also one of the 7 wedges originally proposed in 2004 by Princeton climate scientists Pacala and Socolow; the energy switches needed to create the carbon-free economy of the future.

However, despite the fact that climate scientists are convinced that the world will need to revive nuclear power along with much expanded renewable energy, to build a carbon-free future, many people are just not wild about the idea of nuclear plants near cities. And cities are where most energy demand is. So, even though most of us want a safe climate, nuclear power a hard sell.

However, not all high energy use is near cities. According to cleanshipping.org (pdf)

“If global shipping were a country it would be the sixth largest producer of greenhouse gas emissions. Only the United States, China, Russia, India, and Japan emit more carbon dioxide than the world’s shipping fleet”

Almost 90% of the world’s trade crosses the oceans in cargo ships. Cargo ships typically ply the vast spaces between continents, where they need energy far away from population centers And they need a lot of energy. Because of the amount of fuel it takes to heave freight across oceans, cargo shipping contributes in two ways to climate change.

International shipping creates annual emissions of 1.12 billion tonnes of CO2, and accounts for about four percent of the world’s CO2 emissions.  But shipping also accounts for adding about 133 thousand metric tons of black carbon to the atmosphere each year. Black carbon increases global warming by reducing the albedo effect of reflected sunlight on snow. This is particularly harmful near the Arctic, cleanshipping.org argues:

“In some regions, including the Gulf of Alaska, shipping can contribute an additional 40 percent to atmospheric concentrations of black carbon.60 The Alaska region is particularly vulnerable to black carbon pollution from shipping as the routes between North America and Asia significantly increase the amount of black carbon found in this region.”

We already have nuclear-powered ships on the world’s oceans, many of them Navy submarines, but also ice breakers

According to a White Paper on expanding the use of nuclear power for shipping, “Over 140 ships are powered by more than 180 small nuclear reactors and more than 12,000 reactor years of marine operation has been accumulated.”

Since these have been plying the oceans uneventfully since work on nuclear marine propulsion started in the 1940s, and starting in the 50s, most of them setting out to sea. No incidents have occurred in the sixty five years they have been out at sea.

Nearly all the nuclear reactors differ from commercial reactors producing electricity in that they have been pressurised water types. They deliver a lot of power from a very small volume and run on highly-enriched uranium (actually a uranium-zirconium or uranium-aluminium alloy). They need refuelling only once every ten years, due to long core lives. Newer cores are now capable of going 30- 50 years between refuelling. These are compact energy generators, less than six feet wide by 15 feet tall.

Why not use nuclear power for cargo shipping?

Nuclear reactors don’t have to be gigawatt-level power stations. Cargo ships need about 150 MW of power for propulsion, about a tenth of the capacity of a typical 1,500 MW nuclear power plant.

A very small 1 MW nuclear plant supplied the Antarctic research station for ten years as a test of the feasibility of small nuclear plants in the 1960s.

About six years ago, the CEO of the largest Chinese shipping company, Cosco, proposed to China’s nuclear regulators that container ships could eliminate their carbon emissions by switching to nuclear power. But the Fukushima accident ended the talks.

But in 2014, a research paper: Considerations on the potential use of Nuclear Small Modular Reactor (SMR) technology for merchant marine propulsion brought up the idea again.

What do you think?