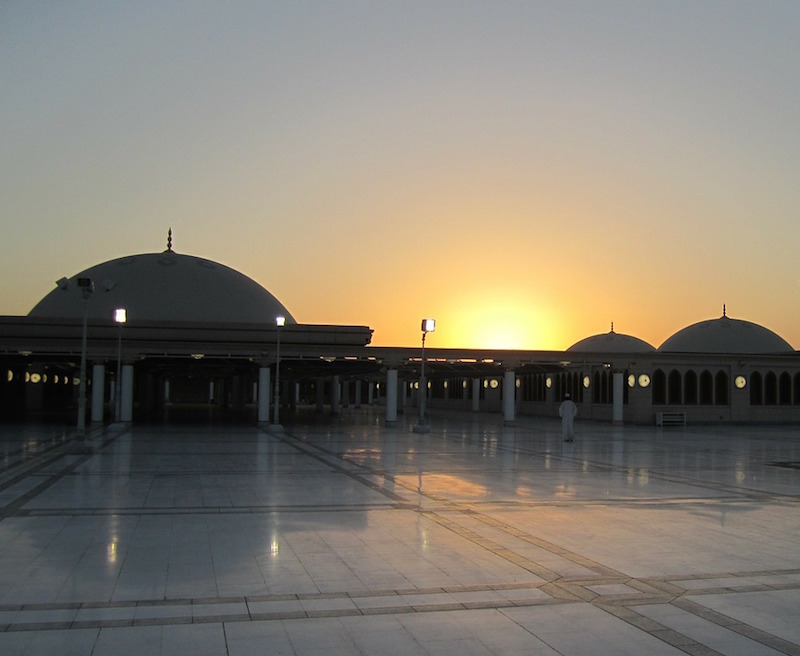 Saudi Arabia has yet to move on its grandiose solar plans announced in 2012 – and now it might be too late.

The Gulf States’ biggest greenhouse gas emitter and the world’s largest oil exporter has yet to make any discernible movement on the ambitious solar plan it announced in 2012 to spend $109 billion to build 41 GW of solar to generate a third of the nation’s solar by 2032.

Yet at this point, three years later, it still only has a mere token amount of installed solar; 50 MW.

Saudi officials estimate that they stand to save half a million barrels of oil equivalent a day for the next two decades, with such an ambitious move into solar. There are very compelling economic reasons to move to diversify the energy of the kingdom, and soon.

The Saudis are almost entirely dependant on oil for revenue. Not only are there few other businesses operating in the kingdom, but even if there were, there is almost no taxation either of income or of spending. The public sector is bloated and overpaid.

Yet nothing is moving on the solar front other than small greenwashing pilots associated with the university.

It’s not as if there is no homegrown talent. One of the most successful solar developers in the world is a Saudi firm, ACWA Power. They are building solar projects in South Africa and Dubai, but none back home. And this, despite the fact that their Dubai project broke world records for low-priced solar.

So it is not as if the kingdom does not have the homegrown expertise to compete with the two or three world-leading companies developing solar.

The kingdom seems to be backing away from actually moving forward on this 2012 renewable plan. Rather than tout these renewable plans in their climate pledge filed with the UN three weeks before a crucial climate conference in Paris, Saudi Arabia merely referred vaguely to a 2030 goal.

Saudi Arabia’s pledge merely stated that 130 million tonnes of carbon “would be avoided”, but made no mention of how, and it was not made clear whether this even referred to cutting existing, or projected, pollution levels. This was in stark contrast to other nations’ detailed plans.

It would seem that the obvious move would be to invest in solar. So what’s holding the kingdom up?

“You really have to have official backing from the highest levels, ” said Oxford University Middle East Energy Expert Justin Dargin in a wide ranging discussion about the many factors behind the Kingdom’s slow start towards the gigantic amount of solar announced three years ago.

With years of experience working in the Middle East energy sector, Dargin was able to pinpoint one of the sticking points holding up progress from an insider’s perspective.

“We do have to recall that the region is quite conservative in terms of deployment of new technology. And, added to that, the oil industry itself is generally conservative,” he said.

“And Saudi Arabia has for most of the late twentieth century enormous financial cushioning because of its prodigious amounts of oil. So it has never had to make difficult choices such as other countries.”

As well as this,  most of the region has a “go slow” attitude when it comes to making change with wide ranging impacts.

Many policymakers in the region would prefer careful analysis of an issue from various angles before giving the go ahead for new technological deployment or policy change. according to Dargin.

“In Saudi Arabia there are many different interest groups that are in operation, large industrial groups, and Saudi Aramco, of course, and many senior princes and so forth, and oftentimes that could make arriving at a streamlined decision a bit difficult.” explained Dargin.

So, it might take Saudi Arabia a little bit longer to deploy this technology, even though it is in best their interest to do so, they have the capability, and they can do so cheaply.

On top of this, history intervened. During the Arab Spring uprisings, King Salman was trying to keep domestic peace by ensuring everybody at home was comfortable and not likely to revolt.

But then this year, disaster struck. Oil prices dropped by half. And with it, an unprecedented result. 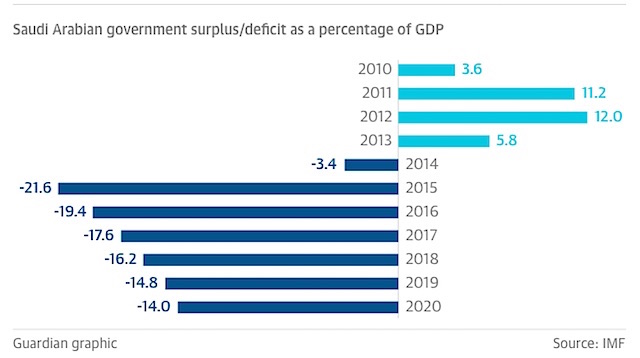 According to internal government documents, Saudi Arabia is now actually in its first-ever deficit.

Surprisingly, to those who see Saudi Arabia as a symbol of excess – the kingdom may actually be running out of money, as oil prices dropped precipitously this summer. By August, the situation was pretty dire, as Gulf News reported:

“According to a report published on Wednesday by Standard & Poor’s Rating Services, the “gradual weakening in economic conditions” will “adversely” affect the banking industry in the region. Growth of net income and deposits in Gulf-based Islamic banks will slow down, while asset quality is seen to deteriorate.

Since June last year, global oil prices have been falling and a strong recovery in the near terms seems unlikely. S&P predicts that prices will remain “relatively weak through 2016”, with Brent crude forecast to average $55 per barrel in 2015, $65 in 2016 and about $75 in 2017.”

A prince with a plan.

King Salman’s son, Mohammed bin Salman, the 30-year-old deputy crown prince is one that does see the need for change from this and out-of-control spending and over-dependance on oil.

Until now, all Saudi Arabians have enjoyed the most fossil fuel subsidies in the world. Rich or poor, all Saudis pay pennies at the pump, and all the houses, apartments and palaces in the knigdom are heated and cooled by burning oil to produce electricity.

He plans to change all that, in a first ever austerity budget for the kingdom. He would reduce subsidies for rich Saudis. He also plans to privatize and then tax the gold and mineral mines in the kingdom.

In addition, he would also create incentives for Saudis to leave government and join the private sector.

But it is hard to see how they juggle all that – when their citizens have never needed to tighten their belts, when oil may never be a huge revenue source again, when defits are forcast to get worse and worse – and now switch a third of the kingdom’s energy supply over to  low priced solar, that will take a $109 billion investment.

Image Credit: Graph The Guardian and tpsdave via Pixabay under Creative Commons Licence