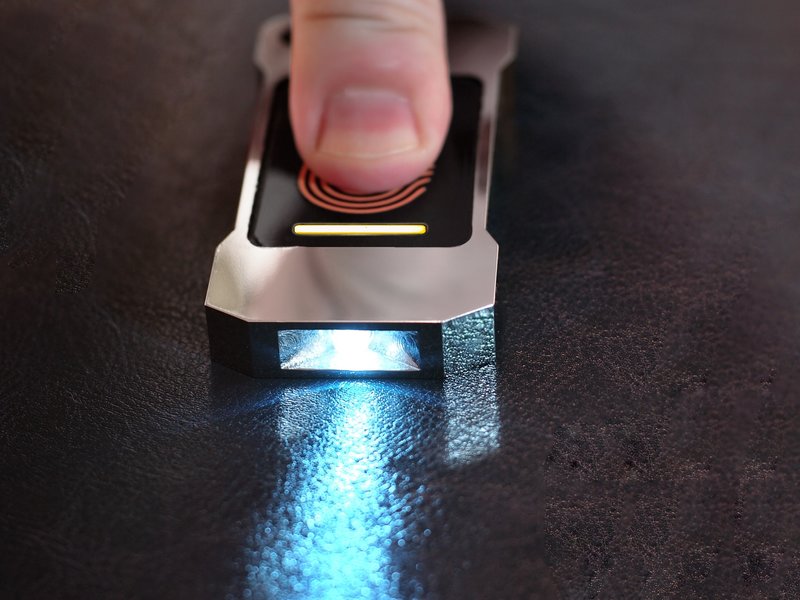 A New York-based engineer has designed a small flashlight that runs entirely on the heat of the human body and requires no batteries or charging of any kind.

The Lumen flashlight is the design of engineer Rost Zhuravskiy, who primarily designs molds and tools for mining machinery. He’s long been interested in green energy sources, and the Lumen is the first of what he hopes will be many alternatively-powered devices. The Lumen is very small, and wouldn’t seem out of place dangling from your keychain, but unlike most keychain-sized flashlights, which use small watch batteries with a short lifespan, the Lumen is powered by body heat.  Zhuravskiy calls it the “eternal flashlight,” because it doesn’t need any external power or charging, giving it a theoretically endless longevity.

The technology behind the Lumen’s battery-free power is a thermoelectric generator. A TEG uses a difference in temperature across its width in order to generate an electrical current. The upper part of the TEG in the Lumen registers the heat from your skin, making it several degrees warmer than the bottom layer: a difference of only 15F will generate enough electrical current to power a small powerful LED of about the same brightness as a flashlight app on a cell phone. Warm ambient air will affect the TEG’s power output, as it’s the differential that matters, but Zhuravskiy has that covered. The success of the campaign allowed him to add a last-minute improvement to the Lumen design: a textured rubber backing that will insulate the flashlight when it’s held in the user’s hand. That insulating layer will keep the bottom part of the TEG cool and increase its energy output when the air temperature is warmer than 80F.

Thermoelectric generators can be used to generate power wherever there is a temperature differential across a small space, and they’re currently used in space probes and for power generation at unmanned arctic stations. With the rise of wearable electronic gadgets like smart watches and fitness monitors, there’s a growing interest in using TEGs for those applications and ditching the batteries.

Zhuravskiy created a Kickstarter campaign to fund his project, asking for only $5000 to cover production costs. By the end of the campaign, he’d received over $150000 in Kickstarter pledges, from almost three thousand interested backers. One only needed to pledge $35 in order to receive a version of the flashlight in a no-frills aluminum body, but a titanium housing upgrade was available to those who were willing to spend an extra $10. And for anyone worried about finding the flashlight in the dark, one version included a small glowing tritium vial embedded in the body. The tiny glass tube, coated with a phosphor and filled with radioactive tritium gas (not dangerous in such a low concentration), could theoretically glow for over a decade.

Backers will be getting their merchandise in early 2016, assuming there are no problems with production. No word yet on when the rest of us can get our hands on our own Lumens, but if this small run goes well we hope that the product will be commercially available soon.