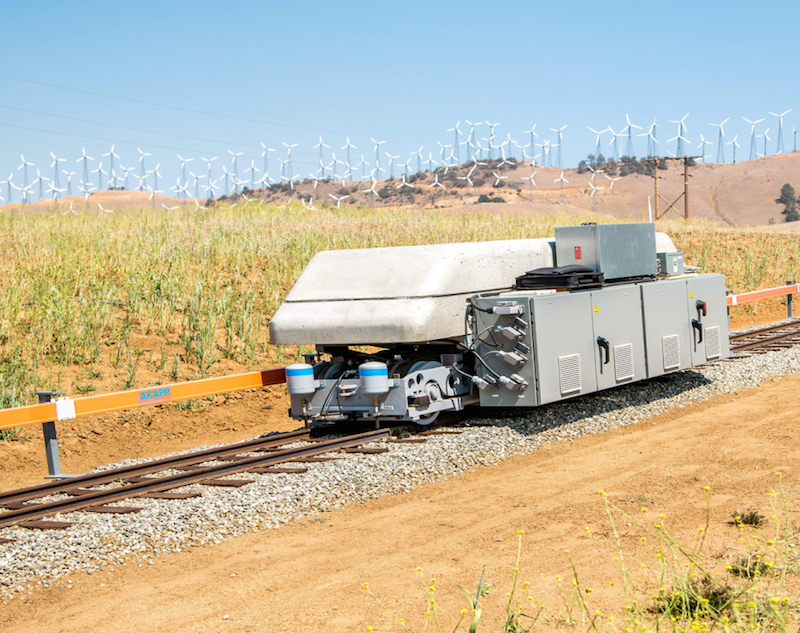 Gravity already supplies us with one cheap and clean form of electricity storage. We can contain and then release a weight — in this case water, with pumped hydro.

When there is excess energy on the grid that no one wants – like wind at 3 AM – the wind power is used to pump water up a hill to a reservoir.

Then when the electricity is needed, the floodgates are opened and the force of the falling water drives huge turbines, which are connected to large generators sending electricity to the grid.

But pumped hydro is only possible in certain geographies. You need a potential reservoir high above a lake or river to supply the closed loop of circulating water. There’s plenty of lakes and rivers, but not many places have that adjacent reservoir high up a nearby hill.

So a California startup has found a new way to use gravity for energy storage. Instead of pushing water up a hill in a huge pipe, ARES (Advanced Rail Energy Storage) proposes pushing a weight up a hill, up a train track.

Seven six-mile tracks would ascend 2,000 feet up a hill with an 8 percent grade.

Then using surplus night-time wind energy; seven five-hundred-foot long seven-car shuttle trains would be pushed up the tracks at nearly 20 miles an hour.

Each “train car” is actually a concrete block: the weight. Each seven-car shuttle train weighs 1,300 tons each, for a combined weight total between the seven “trains” of 9,100 tons.

When released, these would run down the track gain, driving a turbine generating power to the grid, virtually instantly.

Unlike pumped hydro, this system is modular. To increase the storage capacity you just add more locomotives to send up the track. For 1 GW of storage, about as much as the world’s largest pumped hydro projects, it would take 800 concrete block train cars (pulled in groups of seven by locomotives) up multiple tracks.

This technology is not as limited geographically as pumped hydro, because it only requires hills.

In 2012, ARES built and field-tested a demo in hilly Tehachapi, the site of some of California’s largest wind farms.

This so impressed California regulators that the California Independent System Operator (CA-ISO) struck a deal to use the energy storage ARES will supply from its first commercial project.

This $40 million storage project, undergoing Nevada’s permitting process now, will be sited just across the California border at Pahrump in Nevada, 60 miles west of Las Vegas, but serve California which is very interested in adding storage.

The team is composed of experts in the field.

William Peitzke, as Director of Technology Development has nearly 30 years of experience in the energy business, and former NASA scientist John Robinson were looking for a storage alternative to cheap pumped hydro for arid California.

They approached Matt Brown, a ship and plane engineer, who said the answer would be rail. He knew trains had long excelled at moving mass over distance and height.

The three launched ARES in 2009, and added CEO James Kelly who has a deep understanding of the storage needs of California as a former Southern California Edison (SCE) executive.

SCE had already spent $50 million on a battery storage project at Tehachapi billed as “the biggest in North America” at 8 MW.

Battery technology is complex. But there is such a thing as making something complicated that really doesn’t need to be. Gravity is already ready and waiting to be put to use.

Compared to the cost of battery storage, for $40 million and at 12.5 MW, the ARES project will supply nearly twice the amount of storage.

And it’s not surprising it’s cheaper. Like the sun and wind, gravity is free.

All images under CreativeCommons License