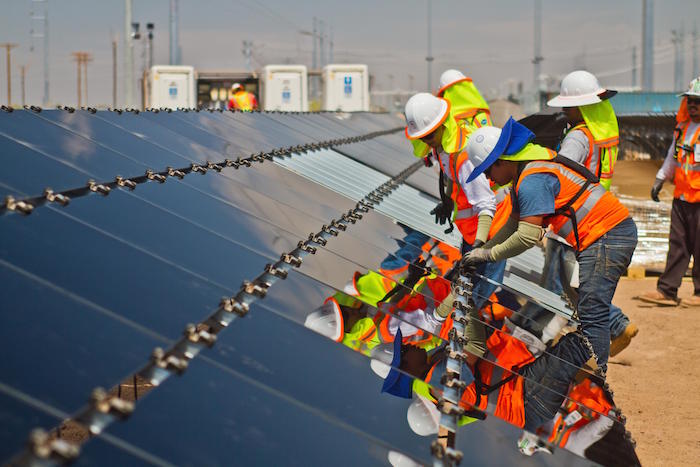 In a historic vote, California legislators have ensured that the eighth largest economy in the world is running on 50% renewable energy within just 15 years.

California’s Democratic-majority legislature just acted decisively to further reduce the use of fossil energy in the state.

The oil and gas interests in the state lobbied hard to prevent the legislation’s passage, but were only able to prevent additional legislation mandating a 50% reduction in gas use in vehicles.

California’s previous electricity mandates have been extremely effective, with the state currently getting the 25% renewable energy it must get by 2015. Utilities in the state have contracts for and are on track to get the 33% renewable electricity from sun and wind by 2020 that it must get to meet its Renewable Portfolio Standard (RPS).

Already, less than 1% of California’s electricity comes from coal, but natural gas-fired power provides the most electricity in the state. It is this that will be most reduced by the legislation, as renewables ramp up even further.

According to the Project Finance Newswire;

PG&E anticipates that it will not need to draw on its banked RPS credits until 2019 and will have enough banked credits to meet a 33% RPS requirement through late 2023. Southern California Edison’s surplus is not as large as PG&E’s or SDG&E’s.

SCE anticipates tapping into its banked reserves by 2017, exhausting its balance in 2020, and needing an additional 7,300 GWh of renewable energy in 2020 to meet the 33% RPS requirement for that year. SCE forecasts an increasing procurement deficit post-2020, with a need, on average, for an additional 13,000 GWh of renewable procurement per year to meet a 33% RPS requirement.

Both solar and wind have boomed in the state, with more jobs created in renewables than in any other sector since 2010. It is clear that Californians understand the link between California’s drought and climate change.

Part of the reason that California has been able to move ahead comes from the support it gets from Californian citizens, who can see for themselves that climate legislation incentivizing more renewable energy has only helped the state.

Califonia’s AB32 is already benefiting the state, for example by funding free solar out of its Cap and Trade funds.

Although the percentages are higher in California and a handful of other states, nationwide; renewable energy now supplies nearly 6% from wind and about 1% from solar, 1.5% from biomass and nearly a half percent from geothermal.

Coal has seen a precipitous decline from over 45% just a few years ago. Coal now supplies only 26.83% of US electricity as of mid 2015, according to figures from the Federal Energy Regulatory Commission (FERC) in its recent Energy Infrastructure Update.

This contrast is much starker within California. Coal supplies less than 1% and as of the end of 2014, solar supplied 7.4% of the state’s electricity. Solar is growing so rapidly that it could be that by the end of 2015 that the percentage could rise past 8% – in a state with a population of 39 million.