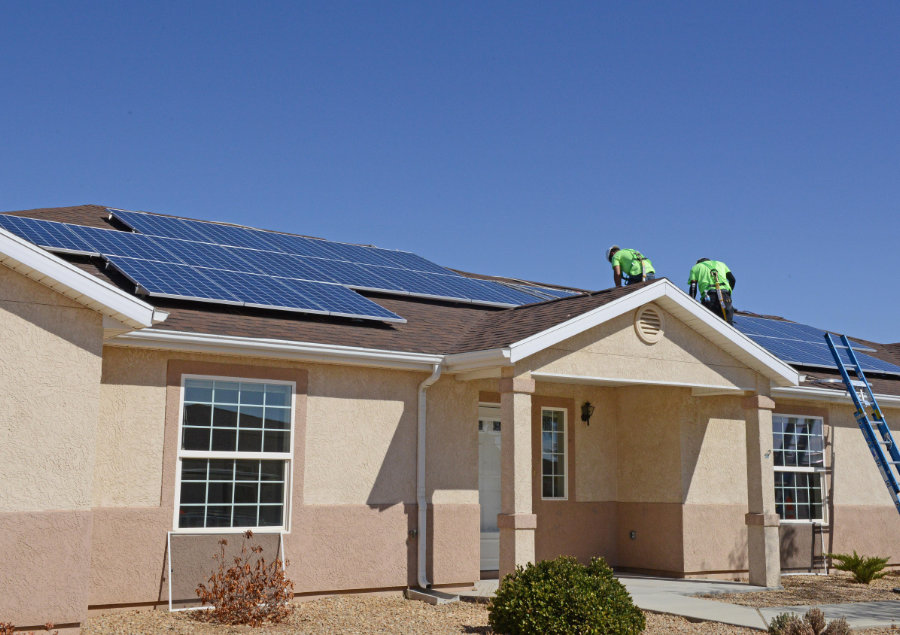 It’s no secret that Tesla’s been slumping on its solar business over the last few years. Once top-dog in the industry, rival Sunrun has since taken their crown. However, earlier this year Elon Musk said 2019 was going to be Tesla’s year of solar and they’re now fighting back, slashing installation costs in a bid to boost numbers. But will customers respond positively to their new tactics?

Tesla has finally updated their website to reflect their announcement that they’ve dropped their installation costs to between $2.50 and $2.85 per watt, before incentives. These new prices are 20% lower than installation costs at rivals Sunrun and Vivint – the two biggest solar installers in the US – which report costs of $3.14/watt and $3.15/watt respectively. For a mid-sized 8 kilowatt installation, that adds up to big savings – to the tune of $5,200.

To accomplish this feat, Tesla is taking a two-pronged approach to cost reduction. First, Tesla will no longer offer custom solar installations. Instead, they’ll offer installations in ‘block sizes’, in groups of 4 kilowatts. So you can buy a 4 kW system (about 12 panels), 8 kilowatts, etc. This cuts down on design time, making the whole installation faster and cheaper.

You might be surprised to learn that the actual solar equipment (including panels, inverter, wiring, etc) only accounts for only about 35% of the total installation cost. The majority of what you pay goes to what’s called ‘soft costs’, which include sales and marketing, profit, overhead, and labor.

The solar industry has done an incredible job of lowering the cost of the actual solar panels. In 2010, solar panels cost a now-unbelievable $2.50 per watt – as much as Tesla is charging for entire installations, labor and everything! Now, solar companies are looking for ways to drop these soft costs as well. Many have tried to speed up the tedious custom design process by using online sales and design tools to speed up the process, but Tesla is obviously taking more drastic steps.

Tesla’s other cost-saving prong is simply having you do some of the preliminary work yourself. Instead of sending out a technician to look at and assess your existing electrical equipment, you (the homeowner) will simply send in photos of your electrical panel, circuit breakers, meter, and any other equipment. It only takes you 10 minutes, but it saves quite a bit of time for Tesla, allowing them to drop the install cost and let you save even more money.

Tesla’s cost-cutting move really shouldn’t come as a surprise; it’s a tactic they’ve used previously. Before the merger, SolarCity always aimed for bottom-bin pricing. In 2015 – a year before the merger – SolarCity reported an installation cost of $2.71 per watt – a price that neither Sunrun nor Vivint have yet to achieve even now.

Astute readers will note that the high end of Tesla’s current ‘cost-slashing’ price range of $2.50 to $2.85 per watt is actually higher than the installation cost it reported in 2015. We’re not quite sure what’s going on there, and while it certainly raises questions on how Tesla is calculating its costs, $2.50 per watt is still really, really cheap for residential solar.

After Tesla took control of SolarCity, the solar installer has been on a downward trajectory. Back in 2015, SolarCity controlled almost 40% of the residential solar market, easily beating out rivals Sunrun and Vivint Solar, which made up just 12% and 10% of the residential market respectively. See the chart below from the National Renewable Energy Lab for details.

While SolarCity did suffer from $3 billion in debt (due to the huge debt from installation costs for solar leases), it was still on top. No other installer could compete with its sheer scale. It was massive – a juggernaut of huge proportions. 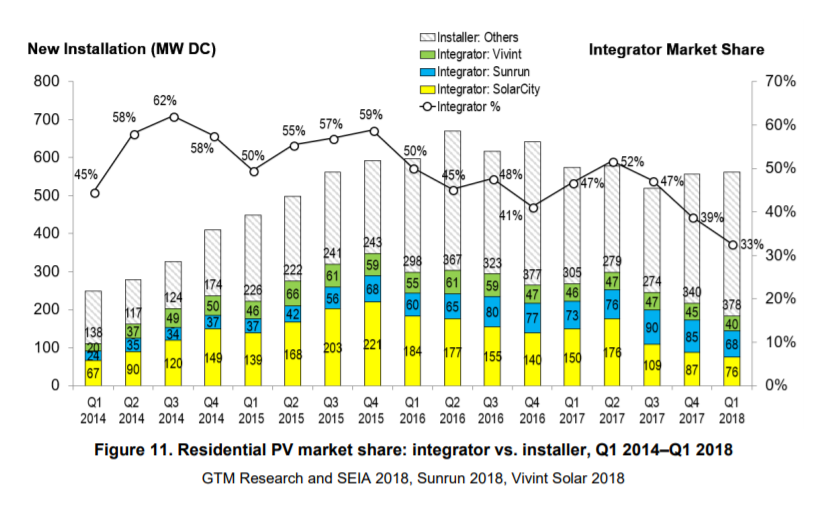 However, in 2016 Tesla bought out SolarCity, and it all started to go south. Many saw the merger, for which Tesla handed out $2.6 billion in stocks, as little more than a bailout for a company Musk had deep personal ties to (Musk’s cousins founded SolarCity). Musk argued that with the buyout, Tesla could create a streamlined, more efficient experience. Customers could purchase an electric vehicle, home battery, and solar installation all in one place. It’s certainly an idea worth pursuing.

From the outset of the buyout, Musk announced they planned to refocus SolarCity on profitability, not outright growth as SolarCity had so relentlessly strived for previously. They refocused solar sales into their Tesla dealerships, cut advertising, and refocused on solar leasing as opposed to solar leases, SolarCity’s traditional financing mechanism, which requires huge amounts of upfront capital.

While the solar company has provided revenue for Tesla over the last few years, the rate at which the solar arm shrank was astounding. At peak form, SolarCity installed 221 MW in Q1 2015. Installations dropped to just 76 MW in Q1 2018, and a shocking 47 MW in Q1 2019 – an 80% fall in just four years.

What exactly happened? It’s possible that Tesla might have shot themselves in the foot when they prematurely announced their industry-changing solar roof. It might be so enticing that homeowners who would’ve likely installed Tesla’s conventional solar panels by now, are willing to wait for Tesla to get the kinks worked out of the solar shingles.

More likely though, Tesla simply has too much going on to really focus on its new solar company, which is puny compared to its electric vehicle arm. Musk said as much at the Model Y release in March this year, claiming 2019 was the ‘year of the solar roof’ and saying,

With this price cut, Tesla seems to be trying to claw out of the hole it has dug itself. Adding solar panels to a home (what Musk calls a ‘solar retrofit’) is, at the present, a labor-intensive process. Simplifying that process is not only a cost-saving measure, but a worthy next step for the solar industry. Tesla is such a well-loved company that, if they can meet demand, homeowners will likely install with them, though it’s yet to be seen if they’ll be willing to go out and take photos of their electrical equipment.