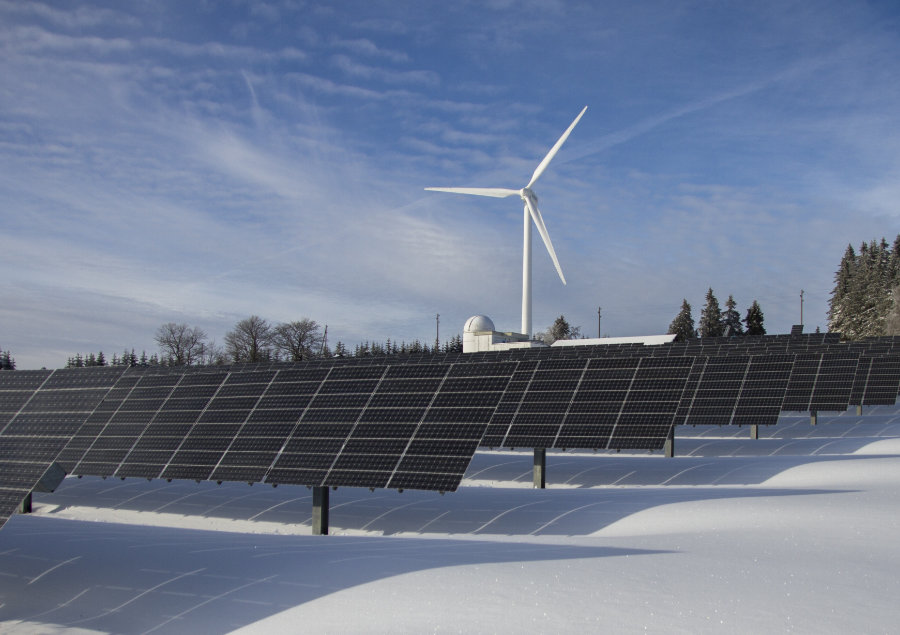 Researchers at the University of California – Los Angeles have created a device that harnesses the static electricity inherent within snow. But while it’s certainly an exciting prospect for small-scale applications like wearable electronics, don’t go thinking your house will be powered by snow anytime soon.

Snow is naturally positively charged, so researchers simply needed to find a negatively-charged material that could ‘absorb’ the snow’s electrons, testing a few different materials before deciding on silicone. When falling snow hits the surface of the silicone, a charge is produced, creating electricity.

Report co-author Maher El-Kady said, “Snow is already charged, so we thought, why not bring another material with the opposite charge and extract the charge to create electricity? While snow likes to give up electrons, the performance of the device depends on the efficiency of the other material at extracting these electrons. After testing a large number of materials including aluminum foils and Teflon, we found that silicone produces more charge than any other material.”

Silicone – a mix of silicon and oxygen – is widely used in many different industries, as sealant for homes, lubricants, and for cooking utensils and insulation. It’s easily available and cheap, making it the perfect option for renewable energy.

The researchers used a 3-D printer to create the device, using a thin layer of silicone and an electrode to ‘capture’ the electrical charge. The researchers call the device a ‘snow-based triboelectric nanogenerator’ or snow TENG. That’s a mouthful, but a triboelectric generator is simply a device that generates usable energy via static electricity. The device, which looks like a small sheet of wax paper with a wire attached at one end, is flexible and stretchable.

The snow TENG can produce up to 0.2mW/m2 (0.2 milliwatts per square meter). In comparison, a conventional solar panel can produce about 180 watts per square meter – equal to 180,000 mW/m2. So to say that – at least right now – the snow TENG is a viable energy source is a bit of an overstatement. Instead, we should probably consider it more of a self-powered sensor as the authors do.

Co-author El-Kady said that, in the future, the new technology could possibly even be paired with traditional solar panels so solar installations can continue to produce electricity when the panels are covered with snow. While solar panels are designed to allow snow to slide off relatively quickly, this of course depends on the depth of the snow and the angle of the panels. In areas like Minnesota, New York, or Wyoming that see heavy snow fall for multiple months of the year, a cost-effective, secondary system of renewable energy generation for use during those snowy times could be a viable product.

As you might’ve guessed, this project from UCLA is the first example of harnessing electricity from snow. You might even think that it’s a pretty ‘out there’ concept, but it’s certainly not any crazier than some of the other ways we’ve found to harness renewable electricity.

Back in 2013, a crematorium in Redditch, England began diverting ‘waste heat’ to a local swimming pool, where it was used to heat the pool’s water. The exercise center where the pool was located said it hoped to save £15,000 a year through this renewable, yet slightly morbid, technology.

Back in the US, Oakland, CA’s East Bay Municipal Utility District uses anaerobic digestion to turn food scraps collected from restaurants into usable electricity. Trucks bring in 40,000 pounds of food waste at a time and dump them into large vats, where bacteria breaks down the mixture, producing methane gas. The gas is pumped to an on-site turbine to create electricity.

Harnessing electricity from snow might seem pretty out there, but it’s those ‘out there’ ideas that can change our society. Creating electricity from sunlight probably seemed pretty crazy back in the 1800s too, but now look how far we’ve come. Maybe in the future we’ll be able to produce electricity on our roofs during cold, snowy blizzards just as well as on those bright, sunny days.