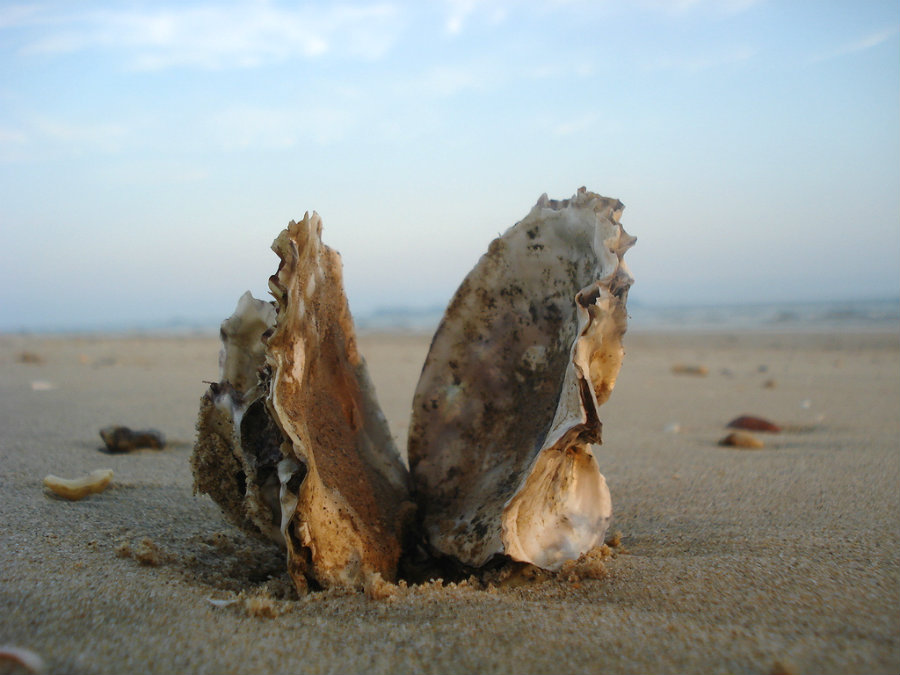 We’ve all heard about how as more CO2 is released into the atmosphere by burning fossil fuels; more is being absorbed by oceans, and that is making the ocean too acidic so that shellfish can’t make shells anymore.

But CO2 is one of the ingredients that shellfish extract from the ocean to manufacture their shells. And some actually thrive in higher CO2 environments

Whether the shells of shellfish like oysters and clams can absorb more CO2 or not under varying new CO2 levels expected under future climate change scenario is an ongoing question.

The research we have all read about has shown that some shellfish would have trouble making shells in a higher CO2 environment  – but at levels of CO2 that are much higher than we’ll see for centuries.

What is less well known is that Woods Hole Oceanographic Institution (WHOI) researchers found that nearly half the shelled species they observed actually built more shell when exposed to varying levels of increased acidification.

This may be because the total amount of dissolved inorganic carbon available to them is actually increased when the ocean becomes more acidic, even though the concentration of carbonate ions is decreased.

So we have several centuries at least before we have an ocean saturated with CO2 at so many times more than the levels we have today, yet these experiments were performed with CO2 levels of 2,800 ppm.

The researchers were surprised to find that some sea animals, like crabs and lobsters for example, were actually better able to make their shells in higher CO2 ocean water. The conch and the pencil urchin actually grew more shell in the high CO2 environment

These researchers found that some organisms were able to hold out until the CO2 levels got up to about 2,800 ppm, a level not predicted for many centuries – under a worst case scenario in which the world simply keeps burning fossil fuels at past rates.

(But given the Paris Agreement, the increased financing for clean energy, and the fast falling costs of safe energy like wind and solar, 2,800 ppm seems unlikely).

Research into carbon sequestration by shellfish

In the immediate future of the next few hundred years, while CO2 levels rise, some shellfish could be used to absorb excess CO2.

One paper suggests that oyster farming could provide much cheaper carbon sequestration than standard CCS attached to coal plants, (which is always ignored as an option because it is too expensive in any case). The study found that oysters on the enhancement reefs of Jincheng marine ranch had sequestered the equivalent of 1071 tons of CO2 from 2009 to 2013 in Laizhou Bay.

There are actually quite a few scientific papers exploring the concept of shellfish sequestration.

At some point in the future, removing carbon from the ocean may need to be considered, says J. P. Hickey, at the School of Natural and Built Environs, University of South Australia.

One method for achieving the removal of carbon from the ocean would be through greatly increasing the ancient practice of shellfish farming, Hickey proposes.

Using what he defines as ‘plate oyster’ stocking density (growing oysters to marketable size for the food industry) he proposed a great increase in oyster farming  – in order to sequester carbon.

Hickey finds that in South Australian current oyster farms, the shells account for an average – after subtracting the weight of the meat – weight of about 70 grams each. The shell is constructed of calcium carbonate CaCO3.

Oysters make relatively McMansion-sized homes for themselves, compared to other shellfish, making them a good contender for carbon sequestration

“Using the atomic weight of the elements within this compound the amount of carbon within the shell can be calculated. Calcium (Ca) has an atomic weight of 40g; Carbon (C), 12g; and Oxygen (O), 16g (Serway, 1996). Therefore the overall molecular weight of CaCO3 is 100 grams.Therefore Carbon contributes 12g for every 100g of shell, or 12% of overall shell mass,” he calculates.

So is this plan feasible?

The Pacific Oyster usually takes an average of 2 years – but can take up to 4 years to reach “plate” oyster size. The oyster farming Hickey looked at, between six South Australian oyster farms, can stock approximately 170,000 to 300,000 oysters per hectare. 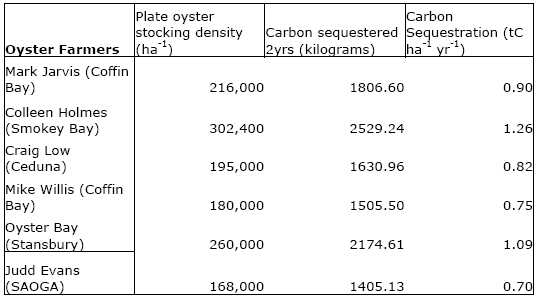 What Hickey found was that per oyster, 8.36388 grams of carbon can be sequestered per 2-year lifecycle, or a range of between 1,400 to 2,500 kilograms of carbon sequestration per hectare, depending on which of the six farms he was looking at in South Australia.

There are many offsetting considerations to weigh. For example, oysters are respiratory animals like us, which means they inhale oxygen and exhale carbon dioxide.

And some question even how much oyster farming could even be considered as a pure carbon sequestration method, given that we humans eat what’s in the oyster shells, so oyster farming is already a commercial activity. This means the jury is out as far as making shellfish farming an accepted natural sequestration technique, like planting trees that in many countries earns carbon credits.

But Hickey is undeterred. Compared to some sequestration technologies under consideration, in which the CO2 sequestration is only temporary, in oyster shell “manufacturing”, the effect is permanent.

The main advantage of oyster farming is that unlike other ocean sequestration techniques, the oyster shell permanently removes carbon from the ocean as well as the atmosphere, Hickey said

“This aspect will become more important as global warming and ocean carbon capacity affect the amount of carbon absorbed by oceans. Regardless of anthropogenic policy making, however, shellfish will continue to play their role in mitigating the greenhouse effect.”

So it seems from these results that oyster farming should be considered as a possible carbon sequestration technology.

Hickey compares the practice of generating offsets through forestry activities in Australia as a baseline against which to assess Pacific Oyster farming in South Australia (SA), looking at the amount of land required to sequester a given volume of carbon as well as the time required.

Like oysters, certain crabs and lobsters actually make thicker shells when there is more CO2 in the ocean, according to the Woods Hole Oceanographic Institution study. This suggests that crab and lobster farming could also be beneficial in carbon sequestration in the near future

Another scientific paper from Europe; “Offshore Wind Farms and their Potential for Shellfish Aquaculture and Restocking” that studied the Danish offshore wind farms that have been in operation for some time as potential shellfish farming sites found that many species of shellfish thrive in and around the substantial metal infratstructure supporting offshore wind turbines.