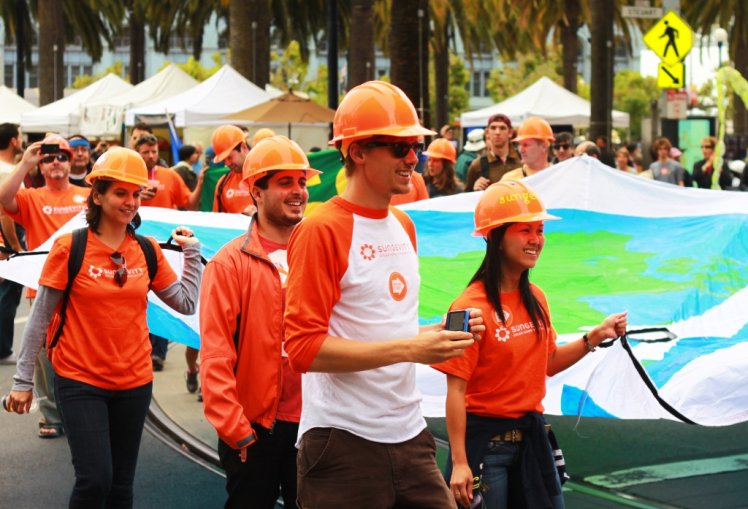 German energy storage giant Sonnen is forging ahead in the American renewable energy market by partnering with new distributor Sungevity in California.

Their storage system will be sold as an add-on for new residential solar installations.

Sonnen (formerly known as Sonnenbatterie) is a German clean-energy storage company already enjoying significant economic success in the European market, where over eight thousand of their storage systems – the Sonnenbatterie – have been sold to date. Headquartered in Germany, they distribute and install their products across Germany, Austria, Italy, Spain, and Switzerland. The company is hoping to take a major role in the rapidly-growing US solar market by getting their products into American homes and businesses before their biggest energy-storage competitor, Tesla, can gain much ground.

Sonnen recently announced a new distribution partnership with California-based solar distributor and installer Sungevity. Sungevity will make Sonnen’s next-generation Lithium-Iron-Phosphate solar batteries available to customers installing solar photovoltaic systems in their homes and businesses in southern California. This deal with Sonnen means more Americans will be able to purchase and install intelligent energy storage systems to maximize the productivity and usefulness of their residential PV installations.

Sonnen broke into the US market in 2014 when it opened its first Sonnenbatterie center in Los Angeles. Their partner in that venture, solar technology distributor and installer SK Solar USA, began distribution of the Sonnenbatterie units in southern California, as an option with new PV system installation. The new Sungevity deal will take Sonnen further into the US market: Sungevity’s various branches deliver solar services to 12 U.S. states and the District of Columbia, and it is the residential solar partner to the hardware giant Lowe’s. With the Sonnen deal, they will be able to provide customers with the option of adding on a well-tested solar energy-storage solution and giving extra value to their solar investment.

Sonnen is known for its smart residential and commercial energy storage solutions: their Sonnenbatterie is already massively successful in Europe. The batteries are able to withstand ten thousand recharges, giving them a multi-year lifespan, and they incorporate an innovative user-friendly interface that allows for remote management of the storage system via a smartphone application. Users can track and adjust their energy use with the help of the Sonnenbatterie’s smart-meter technology, helping them to avoid peak energy charges from their electrical utilities.

Meanwhile, Tesla is manufacturing its own energy-storage product, the lithium-ion Powerwall, for distribution with its own solar power installation partner, SolarCity. Similar to the Sonnenbatterie, it can store excess power generated from solar panels during the day, and power the home through an AC inverter at night. The anticipated demand for the Powerwall system has led Tesla to accelerate their production plans: manufacturing was shifted last year from their smaller California plant to an automated assembly line in their Nevada Gigafactory. Demand is high for the Powerwall batteries in Germany and Australia, but with the solar market expanding in the US, Tesla is growing its sales team and hoping to have their units powering American homes in 2016, before Sonnen can get too far ahead.