Welcome to the party, New York! With the completion of the Delta building at 142 W. 9th Street in Brooklyn this month, the Big Apple has gained it’s first “self-powered” (i.e., net zero) building. Powered by a combination of solar and wind, this mixed-used building will function as a bed and breakfast, offering green accommodations for schools, tour groups and other travelers interested in what it takes to bring distributed renewable energy to one of the world’s densest urban centers.

Buildings that generate all of their own energy on site (or an amount of energy equal to what they consume) are increasingly common. From green eco-epicenters like California and Oregon to Philly, Detroit and even Iowa, net zero buildings seem to be popping up all over the country. Why, then, has it taken until now for New York to complete its first such building? To answer that question (and a few others), we talked to David Scott, a spokesperson for Voltaic Solaire, the developer behind the project.

EarthTechling (ET): Give me some of the background on this building. What’s the vision behind this building? How did that vision develop?
David Scott (DS): The vision is to create pockets of autonomous energy production, especially in industrialized areas and dense city centers, that allow buildings, campuses and communities to power themselves. This reduces our reliance on a centralized power grid and saves money and resources for residents. Black-outs, brown-outs, terrorist attacks, inclement weather, all of these can be ameliorated by nimble on-site power generation (think, for example, of how Fukushima would have benefited from such an approach after their supply chain was so affected by the nuclear disaster).
The Delta developed as an effort for Voltaic Solaire (traditionally a solar-energy residential  installer) to partner with Dynamic Technical Concepts and Designs (DTCD), the design-build firm behind this project and others. Voltaic Solaire’s CTO, Ron Faia, is also a principal of DTCD.
ET: What’s unique about this building, in this place?
DS: What is unique and special about the Delta building, as opposed to all these green developments that are sprouting up all over the world…is that in a really code-heavy city like New York…the Delta really serves as a model for other green builders. To build a [structure] that powers itself on an unusual, triangular lot that has no southern exposure, we had to use a combination of approaches, with both solar and wind.
When you build in a dense urban canyon, how do you have [enough] sunlight to power your building? Luckily, where we’re at in Brooklyn…you have the capacity with these two, three, four level mixed-use buildings to have significant wind and also ambient light. If you tried to do the same approach on a short structure in mid-town Manhattan, you may experience darkness throughout the day a lack of wind…in those cases, you’d have to modify.
[The Delta uses] not only a solar racking system on the roof but a solar skin (they look like windows, but really, they’re a solar skin), which means that ambient light is enough…to power the building. Even without southern exposure, which is generally essential for traditional solar capture, this thing powers itself.
ET: It sounds like what you’re saying here is that in a dense, urban environment with unique challenges, the solution is to use unique technology. On that note: at what point were the partners brought in on this project? What role do/did they play in developing it?
DS: Sharp, Samsung and others were approached early in the process, as their technical ingenuity helped lay the groundwork for this first-of-its-kind development. Sharp, for example, has been a major player in the solar market, having famously developed the first pocket calculator to run on solar power. Urban Green Energy supplied the vertical axis wind turbine; they work with GE, BMW and others to generate power for electric cars, businesses and homes. 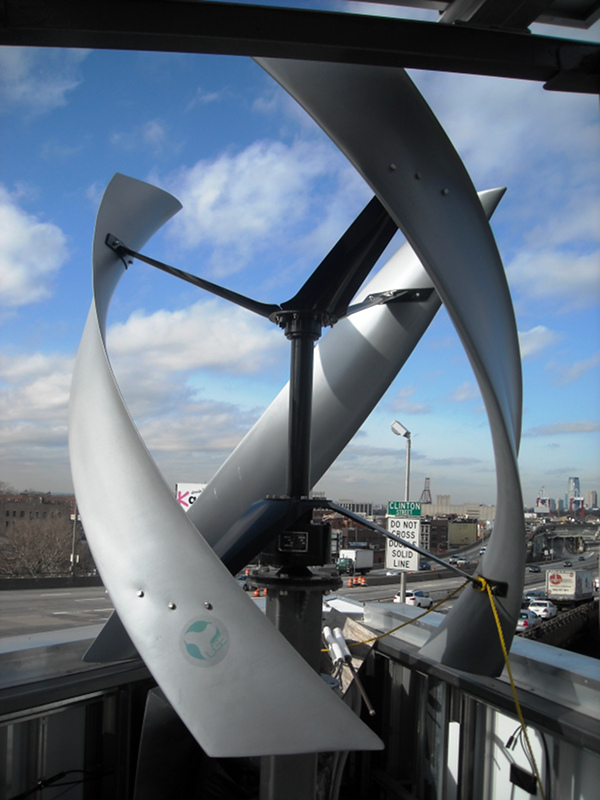 The Delta’s Rooftop Solar Racking System was provided by Schletter; its Solar Skin was provided by Tianwei; its Solar Thermal Panels (on the exterior of the building) were provided by SunMaxx; and its combiner boxes, sub-array combiners (re-combiners), disconnects, cables and PV system performance monitoring solutions came courtesy of Solar BOS. The building also makes use of Tilt Turn Windows from Solar Innovations, which are integral to its sound-dampening and heat-preserving qualities.

ET: How does this building intersect with Mayor Bloomberg’s PlaNYC? How does it compare to other green buildings in New York?
DS: The Delta was inspired by Mayor Bloomberg’s effort, released in 2007, to “prepare the city for one million more residents, strengthen [NYC’s] economy, combat climate change, and enhance the quality of life for all New Yorkers.” [You can view the full PDF of PlaNYC here.] This is truly the first NYC development in the private sector to entirely power itself.