Streetlights do more than tell us when to be home — “Be back before they come on,” our parents would tell us – they also light the way and keep us safe. Nowhere is this more evident than in the sprawling camps of people displaced by the January 2010 earthquake in Haiti. In recent months, the lights have come on at two camps through the efforts of aid groups, the Haitian government and the particular expertise of the Solar Electric Light Fund, or SELF, a Washington, D.C.-based nonprofit that uses renewable energy to provide light and power in developing countries. 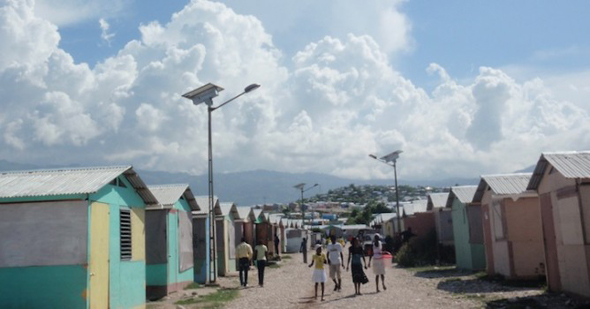 Before the advent of the lights, social life in the camps would fade every day with the setting sun and leave people isolated in their makeshift accommodations, according to Jean-Baptiste Certain, who managed the lighting project for SELF. “They were living on top of each other in those tents,” Certain said by telephone from Port-Au-Prince. Children couldn’t study and women wouldn’t use the public latrines at night because they feared assault. It was a justified fear: an Amnesty International report issued last January found that women in camps were at significant risk of sexual assault, at least in the months immediately after the earthquake.

Nightlife has taken off since the installation of the lights at the Pétionville and Caradeux camps as residents’ sense of security has improved.

Nascent nightlife at the Pétionville Camp. Courtesy SELF

“Small businesses by the market area stay open until later in the evening, providing a source of income to families in camp and the area is busy with people socializing and playing board games,” said Chiara Lucchini Gilera, the Camp and Relocations Program Manager for J/P HRO, the relief organization founded by actor Sean Penn that runs the Pétionville Camp.

Most importantly, reports of violence at Pétionville declined to almost zero after the streetlights were installed. “We believe that the lights are responsible for that,” Certain said.

The nexus between public lighting and safety is hotly debated in Western countries.

Some studies show a decline in crime after an area is illuminated while other research has found that crime actually increases after lights are installed, though it may be because crime is more visible. These studies are of little value, however, in places with collapsed infrastructure like Haiti, which plunged into darkness after the magnitude 7.0 earthquake flattened entire neighborhoods and killed untold thousands.

Survivors flocked in the tens of thousands to camps like the one in Caradeux, where they built shacks with plywood walls and tin roofs, and Pétionville, a tent city built on a private golf course that was crammed with 50,000 people at its peak. The only illumination at night in Pétionville came from 30 solar lamps installed by another group, which SELF officials described as ineffective, and three light towers powered by generators.

Children at the Pétionville Camp. Courtesy SELF

Security conditions in the camps suffered despite patrols of U.N. Peacekeepers and internal security forces. At Pétionville, there were numerous entrance and exit points and people lived cheek to jowl in harsh conditions, creating the potential for conflict, according to the camp’s managers. Women were at particular risk. The Amnesty International report indicated that there were 250 reported cases of rape in several camps (the exact camps were not identified) in the 150 days following the earthquake. Women interviewed for the report indicated that lack of lighting at night played a role in the violence. “In our camp we cannot live peacefully; at night we cannot go out,” one woman told Amnesty International.

“In a post-earthquake environment, where you’ve got millions of people crammed into these pretty densely packed camps, things can get out of control quickly,” said Robert Freling, SELF’s executive director. “Anybody who had been to the camps and could see what was happening realized that lights could have an impact and improve security for the women.”

SELF, which had been electrifying rural medical clinics in Haiti before the quake, got involved in January after being tapped by the Inter-American Development Bank, which finances development in the Caribbean and paid the approximately $300,000 for the lighting project. (Another larger grant from the bank will be used for a rural electrification project administered by SELF). (continued via page 2 link below)

Editor’s Note: This feature comes to us as a cross post courtesy of Txchnologist. Author credit for the feature goes to Matthew Van Dusen.

“Could you please give me a light?”

The camps needed far more streetlights than SELF had available – in part, because the Haitian government wants to move people out of the camps and doesn’t want to invest in their infrastructure – so the first task was choosing locations. SELF’s Certain, a Parisian who speaks what he describes as “broken street Creole,” consulted the management and residents at the Pétionville camp about the best places for the lights.

One priority was lighting the path to the communal toilets. “Women in particular didn’t feel comfortable walking in camp after dark to reach the facilities,” said J/P HRO’s Gilera. The sanitary conditions of the camp suffered as a result. Management also wanted to illuminate the market area.

The other challenge was finding streetlights that could meet some stringent requirements. They had to be hurricane resistant, tamper-proof and function continuously without maintenance. Certain painstakingly sourced two sizes of lamps with 20-foot tall triangle-shaped posts. The larger size has a 185-watt photovoltaic module on top, two sealed gel batteries inside a secure box connected to 36 high-powered LED lamps. The lamps produce 3,680 lumens of light (by comparison, a 100-watt incandescent bulb produces about 1,600 lumens).

A SELF worker installing a streetlight at Caradeux Camp. Courtesy SELF

The installation coincided with heavy rains, forcing the crews to work in two feet of mud, Certain said. But the process also brought serendipitous meetings with camp residents, including three young girls who cornered Certain to lobby him. “They said, ‘You’re the guy with the lights. We want to work after school, could you please give me a light?’” he recalled. The girls got their light, one of 32 installed in the camp.

The security improvements were immediate. The lights function at full power from 6 p.m. to 12 a.m. and at 50 percent between 12 a.m. and 6 a.m. Reported acts of violence, including sexual assault, declined from about six per week when the installations began in June to one or zero per week when streetlights came online in August, according to J/P HRO data provided by SELF. While it’s possible to attribute this drop to other factors – the population of the camp had declined to 23,000 by September and community-based “protection teams” have increased patrols – residents reported feeling an increased sense of security. Increased usage of the latrines also improved Sanitary conditions “significantly,” according to J/P HRO.

SELF completed the installation of 68 lights at the Caradeux camp in September and the positive effects have been similar, Certain said. Despite the efforts of the Haitian government, the lights will likely continue to be necessary, even though they can be relocated when they’re no longer necessary in the camps.

“The fact is that, sadly, some of these camps are going to be here for a good while,” said SELF’s Freling.

Editor’s Note: This feature comes to us as a cross post courtesy of Txchnologist. Author credit for the feature goes to Matthew Van Dusen.