The Voltaic Converter solar charger backpack takes a solid swipe at off-grid charging of your portable devices while you are on the go.

There are no qualms about it – we live in a world where mobile devices are a big factor in everyday life. Cell phones especially seem to sprout from people’s hands everywhere, whether it is for calling up a friend to confirm a date or looking up some information on Wikipedia through the phone’s Web browser. These devices, of course, need power to keep them going and sometimes run out at the most important moments.

Normally you’d charge these devices (assuming they aren’t using regular or rechargeable batteries) via a wall or car power outlet. What if you don’t have access to those though? That’s where off grid power accessories, such as solar-powered chargers, come in. One of the earlier companies in this particular product space is Voltaic, a developer of bags with solar panels in them. These stylish items, including backpacks and messenger bags, harvest the sun’s energy and channel it into a power storage unit you later can connect to a compatible device in need of electricity.

While one can connect many types of low power devices to a Voltaic bag, we will consider for the purposes of this review a Blackberry mobile phone. Will the tested Voltaic bag be able to charge up this power hungry handheld in a decent amount of time?

Voltaic provided for us its Converter backpack, which prices for around $200. It is the smaller of the company’s two backpack models, being essentially a daypack. It has a compartment in the back for a water bladder, which some might find strange considering you are also carrying a sealed portable lithium-polymer battery charger powered by the bag’s integrated solar panels on your back in the same pack. We’ll just assume no one has been fried by that combination and move on.

The backpack itself seems to be of solid construction, being made from recycled PET (soda bottle) materials. It has adequate storage to hold a variety of your favorite gadgets and other items, including a padded section for a laptop. It should be noted the included battery charger is not designed to power laptops, so you’ll need a separate way to keep the juice on that device topped (i.e. the laptop’s power cord).

The three four-watt solar panels, which feed solar energy into the charger via an internal bag cable connection, are on the front of the pack. They provide a nice rigidity to an otherwise soft pack and are said to be tough enough to handle the normal jostles of day to day activity. Not that we recommend you slam them down on street asphalt repeatedly to test this theory (though they can easily be replaced if you decide to do so).

Included with the battery charger as accessories are a USB power out cable and 10 standard adapters that should fit between the cable and most common power connection ports on cell phones and other small mobile devices. We say small mobile devices because, as the documentation that comes with the Voltaic states, it will only work with handheld units that require five volts of power – items needing more or less power are out of luck.

The Voltaic Converter is primarily designed to be charged through the solar panels in as much direct sun as possible. You can try charging it indoors, but Voltaic says the charge will be negligible. When the solar panels get hit by light, a small red LED in the center of the pack’s Voltaic logo will glow to tell you a charge is being produced. The only problem is that light also goes on when indoors under lighting, which, based upon the previously mentioned power collection difference, may throw some off into thinking the battery pack is actually charging up at a decent hourly rate.

The actual charging of the panels to produce electricity for the charger is a bit tricky. Voltaic mentions that for best results the direct sunlight exposure should occur with the panels angled towards the sun. It is also mentioned the battery will fully charge in seven to eight hours, which might require you to keep up with the sun’s movements in the sky to keep your bag best positioned. Our tests of the solar panel’s charge time on a typical sunny day showed that it took around the previously mentioned time to charge the battery.

For those who are inpatient, or perhaps lack access to hours of direct sunlight, other options do exist to charge the Voltaic bag’s battery. These include a USB power cable which can be connected to a USB port on a computer, as well as optional AC and DC chargers. These latter chargers cut the full charge time down to under four hours (you can check battery charge status via LEDs) but if you are using them on a regular basis, what’s the point in owning a solar-charger bag in the first place? 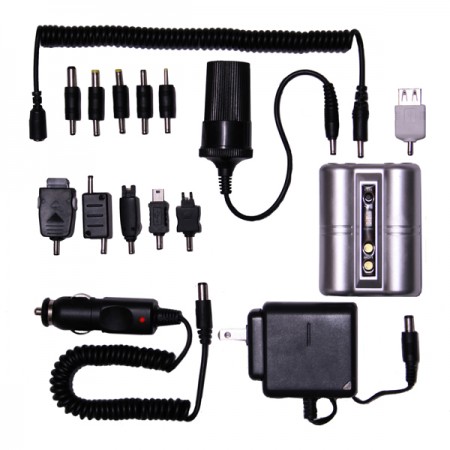 In regards to charging attached devices, the Voltaic Converter bag fully charged the Blackberry’s battery in an impressive under three hours, which was less than the company’s projected four to six (charging estimates will vary depending upon the type of small electronics device you are needing recharged). One charge, however, did drain somewhere in the neighborhood of half the battery pack’s power. That’s something to keep in mind if you have multiple devices to charge and are in situations where sunlight is not optimal or outlet power sources aren’t available.

The Final Word:
The Voltaic Converter solar charger backpack is a useful tool to have for those who need a reliable source of off-the-grid energy during their daily travels. The optimal charging time requirement via hours of constant exposure to direct sunlight to fully charge the battery may mean though sometimes you don’t have a topped off battery though if you are ducking in and out of buildings, which is something to keep in mind.

The inclusion of a nice array of connector tips, the battery status LEDs, the stylish look of the bag, the ability to quick charge the battery via non-solar methods and the fast power transfer time from the battery to a mobile phone are plenty of reasons to consider the Voltaic Converter as a daypack of choice for those looking for more eco-friendly power solutions for their portable devices.