Dear EarthTalk: What is biochar and how can it help reduce my carbon footprint?  — William Jarvis, Bethlehem, PA

Biochar is a naturally occurring, fine-grained, highly porous form of charcoal derived from the process of baking biomass—and it’s been associated with fertile soils for some two thousand years. “Biochar is found in soils around the world as a result of vegetation fires and historic soil management practices,” reports the International Biochar Initiative (IBI), a trade group representing the world’s burgeoning biochar industry. “Intensive study of biochar-rich dark earths in the Amazon has led to a wider appreciation of biochar’s unique properties as a soil enhancer.” 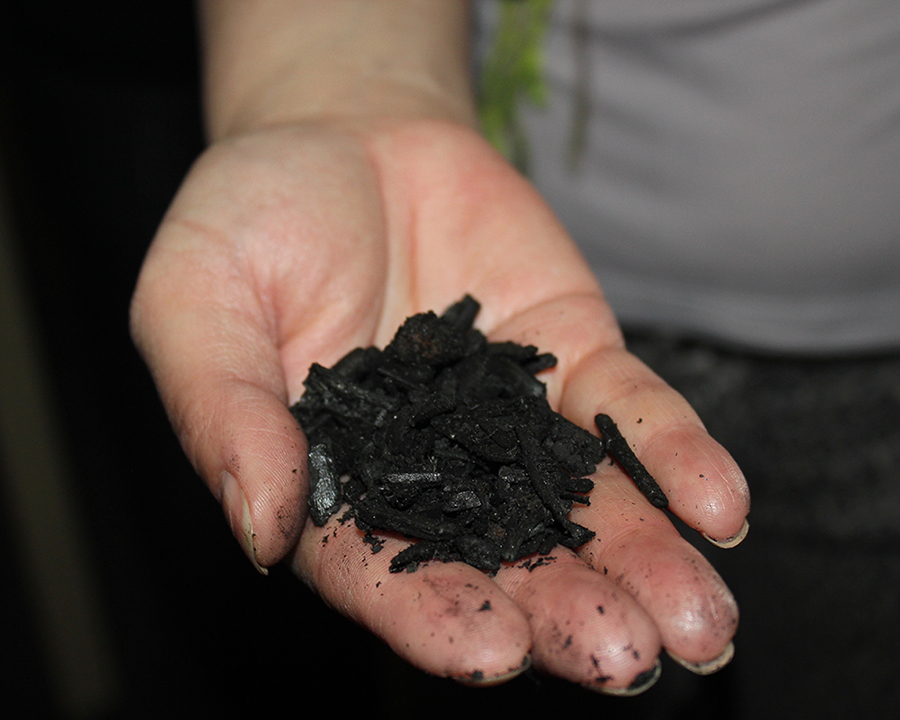 Indeed, researchers have been hard at work perfecting their own methods for manufacturing biochar by baking biomass in giant oxygen-free kilns. The resulting biochar can then be used as a soil amendment to help restore tired, compromised farmland, not to mention contaminated industrial sites, all the while taking carbon dioxide out of the atmosphere. A liquid by-product of the biochar production process can also be converted into a carbon-neutral “biofuel” that can displace other carbon intensive fuels.

Farmers can layer biochar into their fields where it becomes part of the soil matrix and helps retain water and essential agricultural nutrients like nitrogen, phosphorous and potassium. “You can basically think of it as a soil reef upon which abiotic and biotic phenomena happen,” says David Shearer, CEO of Full Circle Biochar, one of a handful of U.S. based biochar start-ups working to commercialize the age-old “technology.” Farmers like the fact that using biochar can lower their water and fertilizer bills as well as yield more and better quality agricultural products—leading to better market performance overall. “This is really a hedge for farmers,” reports Shearer. “It really helps them manage their financial risk and it helps them manage risk into the future around production.”

Beyond agriculture, biochar can also be used to clean up polluted land. “For example, if you have a mine that has contaminated soil adjacent to it, biochar … will allow you to remediate soils,” says Shearer. He adds that biochar also makes for an excellent filtration medium: “We know that activated charcoal has been used for millennia as a filter mechanism, and so there is discussion in the biochar community that maybe the first step is we’ll use it as a filtration media, and then we’ll move to agriculture as the cost of production of biochar comes down.”

As far as environmentalists are concerned, the greater the demand for biochar the better, given the fact that it is a potent storage mechanism for carbon dioxide that would otherwise head into the atmosphere and contribute to climate change. “The carbon in biochar resists degradation and can hold carbon in soils for hundreds to thousands of years,” reports IBI. “We can use this simple, yet powerful, technology to store 2.2 gigatons of carbon annually by 2050. It’s one of the few technologies that is relatively inexpensive, widely applicable and quickly scalable. We really can’t afford not to pursue it.”